Team Adventure - To the Moat House! 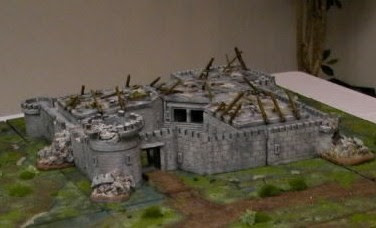 Having had their collective backsides kicked by the ogres in the previous session, Team Adventure needed something new to get their teeth into. Ever willing to oblige, I decided to dust down an Old School Classic and got out my copy of ToEE (purchased from Mike Badolato many months ago). I turned to the Moat House and off we went.

The gang were approached in town by a representative of the Clerics’ Council (which as you may recall, was more or less invented by Mummy Grognard, so I’m picking up the ball and running with it)

The clerics had agreed to do a cut-price Raise Dead in return for a service from the party. Today was payback day.

They revealed that a building known as the Moat House, a day or so away, which had been in ruins for quite some time, had been reported as being used as a headquarters by a band of monsters led by an evil cleric. There were also reports that he had acquired a holy chalice which was an important cult item for the Clerics’ Council and they wanted it back. The party’s mission was to go to the Moat House, find out what was happening, deal with the evil cleric and get the Chalice back. Anything they found at the Moat House was theirs to keep except for the Chalice.

This ticked everyone’s boxes – a rationale for the party other than simple monster-bashing, a link to the emerging milieu, a chance to get their hands on loot and an in for the newest player. You will remember that last time, the brother of Cafaror’s player had come by to sit in and see what the game was like, and ended up playing Merlin the thief. Well, he was not put off by the experience and turned up for his first proper session. We rolled up a fighter who was christened Adthar and I announced that he was the nephew of one of the clerics on the council and was being sent along to make sure the party stayed on target and obtained the chalice.

Arriving at the Moat House, they were confronted with a description block that really had a great effect in setting the scene. I must make more use of those myself rather than just saying “You enter a room…” As adult players, we do tend to get a bit blasé about the scene-setting paragraphs in modules but the kids loved it.

They decide to try and cross the moat, rather than using the drawbridge. Merlin the thief waded across the moat and tried to climb the embankment on the far side, but alas failed his Climb Walls and slid right back down the embankment and into the moat itself. That was the cue for an attack from one of the giant frogs who was swimming around hoping for a meal. The frog missed by 1 and the rest of the gang hauled Merlin out, remarking that he was perhaps a tad smelly at this point.

I’d decided not to throw the full gamut of giant frogs at the party on the approach – a combat of that nature could well cause them to lose heart and this was not the experience that I wanted them to take away from the day’s session.

Eladar the MU used a Jump and landed on the far side of the moat, then used an iron spike and tied a rope to it so that the party could shimmy across. Soon, they were all standing at the foot of the tower in the bottom left hand corner (the one with the spider, except of course they didn’t know that yet!)

Merlin decided to try and climb up the wall of the tower and actually managed to roll under his Climb Walls percentage (a rare event with this party!) bringing him up to the arrow slit in the wall (which had crumbled somewhat, making it accessible if a bit of a tight squeeze). He was tempted to go through that but then for some unknown reason decided to head for the battlements at the top of the tower instead. He failed his roll again (00 on percentile dice) but I had him make a DEX roll and he managed to grab hold of the arrow slit sill, then hauled himself back up and in.

He lowered himself down to the floor and took a look around but failed to spot the large spider that swung down on its web and took a bite at him. It missed but in the very brief combat that followed, he took a bite and failed his poison save.

The rest of the party, hearing some odd noises, then silence, edged round the tower and in through the gateway, finding Merlin lying on the floor and something large and eight-legged hurtling down on them again. A swift attack by the party led to the spider being run through by Adthar.

The party, having found a few copper and silver pieces and an ivory box (cue treasure in the form of trinkets and valuables rather than coin, a feature of this dungeon) headed across the courtyard and up the steps. Inside the great hall, they were confronted with two passageways and a door, but Adthar spotted an open archway that led to a storeroom, from which the sound of scuffling and skittering could be heard. The rest of the party quickly realised they were giant rats and – not wishing to be overwhelmed – Adthar tossed two oil bombs in there, which I ruled fried quite a lot of the waiting rats. First session, totally getting the hang of tactics!

Meanwhile, Alurax had decided to try the door and went over to it and pulled it open. On the other side was a goblin chieftain who was totally surprised by what he saw facing him. Combat broke out, with the chieftain being hacked down from 17hp to 4 before a Sleep spell from the MU floored him. By now his band (I’m using goblins in place of human brigands further to our discussions about human on human combat) had rushed into the fray and the party had to defend itself against a determined attack which, although doing some damage, was ultimately defeated. Two goblins had fled out of the hole in the wall, swiftly realising that they had no time to dig up their treasure. Their feeble attempts to extract it were, however, spotted by the party, who dug it up and opened the chest (with no thought to their own safety), revealing the hoard of copper pieces, fine cloth, flagon and goblets, fine box and arrows that had mysteriously glowing tips)

At that point, with most of the players having to go home, I had to call it a day. The party had made a good start and recovered some nice loot although they would not be able to gain from the XP until they returned to town to convert it into GP. Adthar’s player had enjoyed himself greatly and was a confirmed returner. All in all, a positive outcome for the Team.
Posted by Daddy Grognard at 09:30