An Adventure for Every Monster - Devil, Horned 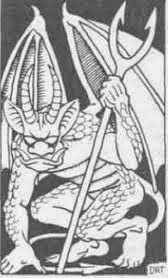 This adventure is best saved for the time at which the party need to make a sea voyage. Perhaps they’ve upset somebody in their home town, or things are getting hot after their last mission.

The party have been hired to escort a merchant across the sea to a neighbouring port where he is going to conduct negotiations for a new trade deal. He is very keen to get it sorted out and has hinted that if things go well, the party could be in for a bonus.

However, once at sea, the party start to realise that they may have let themselves in for more than they bargained for. Somewhere on the ship, a horned devil is at large, masquerading as one of the passengers. Which one? Nobody knows. Why? To wreak havoc and turn the ship into a floating mausoleum. Who stands in its way? Why, the party of course!

The devil’s abilities include

The devil will try to eliminate anybody who might realise what it is. It will not try to confront its enemies directly but use its many magical abilities to manipulate, incriminate, sow discord and suspicion and generally stir the pot. Who are the most paranoid people on the boat? Why, the party, of course!

The closed environment of a ship is an excellent opportunity for the DM to put on their Call of Cthulhu Keeper’s hat. There are many nooks and crannies for an imaginative devil to hide and it can also take the place of passengers that it has killed in order to get closer to the party without them realising it.

Let us not forget that the ship’s crew have access to more or less every inch of the vessel and a quick Charm Person can turn them into the devil’s spies. Since he can only be hit by +1 weapons, a crew member could be charmed to have any magic weapons the party has on them mysteriously disappear.

The DM can stir things up more with the revelation, delivered by carrier pigeon a couple of days into the voyage, that the patron’s entire family have been brutally murdered back home. This may have nothing to do with the patron himself; he has business rivals who he has double-crossed in the past and this might be their revenge, thinking him home at the time. However with everything that’s happening on board ship, it’s another reason for the party to be very worried indeed.