An Adventure for Every Monster - Baboon 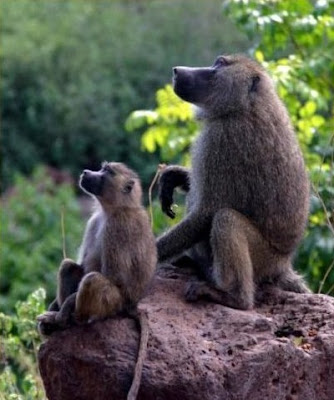 This adventure takes place in a part of the dungeon with a high-ceilinged hall that is not prey to the attentions of humanoid raiders or other such creatures. It has a main central area, at least two doors and two balconies, each accessible by spiral staircases. The balconies have balustrades made of carved stone.

The peace and quiet of this area of the dungeon attracted the attention of a magic-user who was seeking solitude for his experiments into a polymorph spell that would allow the transformed creature to retain his personality and memories in the new shape. He began to work but several weeks into his project, an accident occurred. A cauldron of liquid exploded, showering the magic user and most of the laboratory. The liquid itself was an extremely potent contact version of the polymorph potion and whilst it did allow the magic user to retain his personality, it left him in the form of a baboon.

Horrified by his transformation, he set to work to try and reverse the process before he became inexorably an ape in mind as well as body. However, the laboratory had been badly damaged by the explosion that caused his change and time was running out because, although he still had his own mind, the instincts and drives of the baboon body were starting to dominate.

In the intervening weeks, two parties of adventurers passed through the laboratory and decided to search it for any loot or magical treasure that might be there. The transformed magic user lured them into section of the laboratory where they would come into contact with remaining pools of the magical liquid and before long, the number of baboons had increased significantly (they now number between 8 and 14 but the DM can adjust the figures accordingly). Being mostly male, the transformees are keen to acquire more females for their troop and will do their best to draw any female adventurers into areas and situations where they run the risk of being transformed.

They have exceptional climbing skills and will place themselves in high and (to the party) inaccessible places and hurl bits of stone or other missiles at the adventurers until pursuit is given.

An investigating party may well find articles of clothing, armour and weapons left behind when the transformations occurred.

The liquid itself causes the effects of the 4th level spell Polymorph Other to the person touching it, but only if it comes into contact with the skin. There is a saving throw against this, but if it does affect the victim, no system shock roll is required. Whilst the polymorphed person retains their personality and memories at the outset, the mind will slowly become that of the new form in (Original INT – New Int) x 3 days.

The original baboon was an 8th level magic user with INT 17. His cunning prevailed for quite some time and he has managed to use several unbroken flasks to make polymorph bombs by filling them with liquid. He will use them if a party is giving his troop particular trouble.

Littered around the ruined laboratory are pieces of the equipment used to carry out the experiment in the first place. Careful examination of the equipment and consultation of the notes that the magic user made before the explosion will give a character with INT of 16 or higher a good chance of recreating or reversing the process. The notes have been scattered by the explosion and the laboratory will have to be comprehensively searched in order to recover them all. The equipment may, if recovered intact, fetch between 100-400 gold pieces if sold to the right buyer. The notes are of great interest to magic users and, if word of their existence is disseminated wisely, representatives of various magic users or their guilds will contact the party and a bidding war may ensue. However, less scrupulous wizards may decide to take rather than buy.

On each balcony of the room are several runs of shelving, containing, amongst other things (1d30)

1. A jar of soot
2. Thirteen marbles in a jar
3. A jar of powdered corn extract
4. Jar of salt in which is (unseen unless the jar is opened and half-emptied) a human finger wearing a ring that will open a door deeper into the dungeon.
5. A small piece of papyrus with unknown runes on it
6. A brass candlestick in the shape of a nymph
7. Jar of phosphorus
8. The skull of a goat
9. A map of an unknown area of the dungeon with notes in a mysterious alphabet
10. A container of powdered iron
11. A bag half full of feathers
12. A stuffed owl
13. A jar of sand
14. A container of powdered chalk
15. A whetstone that, if used to sharpen a sword or knife, will impart a +1 bonus to hit and damage for the next 1d12 attacks.
16. The head of a bear flayed and made into a hat and facepiece
17. Reels of fine copper wire
18. A jar of dried rose petals
19. A half-eaten forelimb of an unidentified humanoid
20. A ball of string
21. A bag of half-burned candles
22. A necklace made out of human molar teeth
23. Three dead and stuffed bats
24. A jar full of rusty iron nails
25. A child’s doll with no eyes; if touched, it starts to say “help me, please help me” in a girl’s voice
26. A wind-up canary that sings lewd songs about goblins
27. A jar full of glass eyes
28. A nugget of iron pyrite
29. A medallion with an arrow on it; whichever way the arrow is pointing, a voice will state every 30 seconds the compass direction
30. A loop of leather that smells of salty sweat

Carefully hidden somewhere in the room (DM’s discretion) is the magic user’s spellbook. It has

inscribed therein. However, it is protected by Explosive Runes which will detonate if opened.
Posted by Daddy Grognard at 09:30