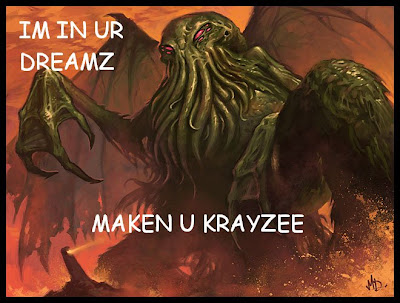 Found this whilst out on the net today. Check out the site - it shouldn't work but it does - hilariously. And I don't even like lolcats.

It also introduced me to the macabre work of Michael Whelan's Halloween collection. Whelan is a brilliant artist anyway and well worth a visit; he does do lighter stuff, honestly.
Posted by Daddy Grognard at 23:05 2 comments

Mountains of Madness - then or now?

As we all know, Guillermo del Toro (Hellboy, Pan's Labyrinth) is at the wheel for the movie adaptation of At the Mountains of Madness, HPL's classic tale of where not to go on your skiing holiday. Good news for Lovecraft fans, even if his co-pilot on this project is James 'Titanic and Avatar' Cameron.

I was all a-go for this until a thought struck me - I'd assumed that any film of the book would be set in the 1930s where it belonged but how do we know that's what would happen? Would it actually work if updated to the present day?

If we really wanted a modern version of AtMoM, we've got John Carpenter's The Thing and Aliens v Predator (the similarities between those and Mountains are manifold, although there are, of course, big differences).

I watched Jackson's King Kong the other day (eeeew, big worms, must use for next CoC adventure!) and he has very faithfully recreated the world of 1933. The original was a work of its time but I'm sure we all remember (although we try to forget) the 1976 version with Kong on the World Trade Centre (perhaps that's why it doesn't get shown much these days) fending off jet fighters.

For me, part if not all of the attraction of HPL is the (to us) period setting - am I alone in thinking that if del Toro and Cameron update the story, it would somehow lose something?

I've set up a poll on the matter - let me know what you think and vote for your preferred option.
Posted by Daddy Grognard at 09:32 9 comments

Just came across this site; interesting reading if you - like me - are an HPL fan.

I'm the only follower at present - not sure what happened to the others...last time I saw them, they were going down that corridor over there...

UPDATE - it's okay, I've found them now. They'd gone to have a look at those fossils from Antarctica.
Posted by Daddy Grognard at 09:56 4 comments