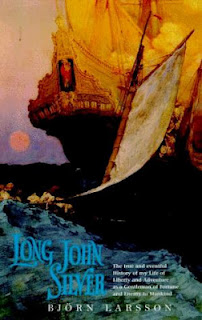 I’ve just finished this one and had to take the opportunity to recommend it to anyone who likes a good pirate story. But it’s more than that, actually. Not only does it riff off the original Treasure Island but it takes the Silver character and fleshes him out in a way that’s wholly respectful of the source material and yet at the same time very much an original creation.  The prose is excellent and totally in character for the eighteenth century, made all the more impressive that it was written in Swedish and translated brilliantly into realistically briny and nautical English.

Larsson’s Silver is a compelling and fascinating individual, powered by the desire to live on after his inevitable demise. To this end, he sets to penning his autobiography from the island sanctuary to where he has retired. Larsson has given him a truly memorable history, full of incident and adventure, stuffed to the gunwales with authentic period detail. Real characters and events mix with the fictional creations and it seems from the author’s postscript that the former might well outweigh the latter.

At a certain point, Silver starts to realise that the literary character bearing his name has taken on a life of his own; in a way, the act of writing down his account of his life is almost hastening his end. The flesh and blood fades away as the legacy steps forward to take its turn in the spotlight.

For all the treachery, bloodshed, rapacity and lusty seafaring, Silver’s character comes across as immensely likeable in a strange way. He breaks from the linear narrative several times, at one point encountering Daniel Defoe in a London tavern, assisting the author with his work “General History of the Pyrates” on the condition that Silver himself is left out.  As the story continues, an air of melancholy infects the narrative as, one by one, the old pirates are hunted down or die in mires of vomit and brandy. Just as Pike Bishop saw out the era of the traditional outlaw, so Silver stands as sentry at the exit door for such colourful characters as Flint, Taylor, Hands and England.

A thoroughly enjoyable work and recommended – not just for pirate enthusiasts but for anybody who is starting to look at the story of their own life and wondering how they will be read by generations to come.


Did I mention that the front cover is by Howard Pyle?

Posted by Daddy Grognard at 22:46 4 comments


"Say, honey, have you ever wondered whether bulletproof glass really IS bulletproof?"
Posted by Daddy Grognard at 12:03 3 comments

The session started with a burst of action. Galadeus, using his Potion of Climbing, scaled the wall of the gatehouse and was confronted by four gnolls,  three of whom moved to attack. The fourth slipped away, his purpose unknown to the party. Galadeus decided to use his magic spear but in attempting a complex attack with it, he lost control and nearly dropped it over the battlements; only an inspired grab and twist enabled him to keep it in combat. 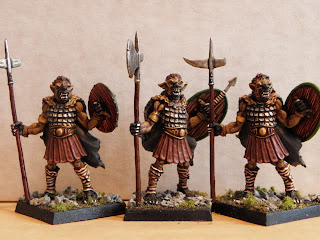 Keen to support their comrade, Gullhar and Alagon shot at the gnolls to try and reduce the odds and with that assistance, Galadeus was soon facing three dead gnolls.

Casting a Fly spell, Elysia arrived on the battlements alongside the ranger just as an unearthly bellow emerged from the interior of the gatehouse. Moments later, a huge minotaur appeared, heading straight for the magic user and her companion. Galadeus used his last oil bomb and the snorting beast took burn damage to its arm. 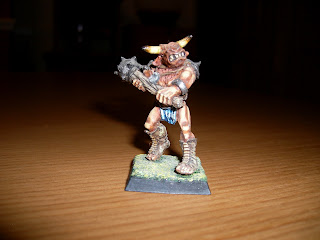 Meanwhile, Alurax and Alagon had arrived at the gate and used their oil supply to try and get the gate on fire. They managed to get a fire going but then had to pull back because of the heat and were unable to use the lee of the gatehouse as shelter from gnoll archers. If Alagon thought he was safe enough, he was badly mistaken as the gnoll archers were on excellent form and the paladin was hit by as many as ten arrows. Alurax also took damage, which was not what he was used to.

Dodging the blows of the minotaur, Elysia took off with Galadeus and they landed on the bridge. With her Shield up, Elysia fended off several of the arrows that were aimed at her and cast Sleep on the space beyond the arrow slits to try and reduce the number of archers that were targeting the group. Nevertheless, the arrows kept on coming and with no way of getting the gate open (it was on fire anyway) the party decided that they should withdraw out of range into the passageway on the far side of the river.

Alagon proposed that they should return to the Room of the Stone Coffins where they could get some rest and lick their wounds. However, only an hour or so into their rest, one of Ferros’ zombies woke his master to inform him that someone was coming. That someone turned out to be an ogre, who climbed the steps up into the Stone Coffin room. He was somewhat surprised by the presence of the party, which cost him dearly. A Magic Missile from Elysia, Galadeus’ magic spear and a terrific sword hack by Alagon sent the ogre back down the stairs to end up dead in a pool of his own blood.

The disturbance eradicated, the party settled down again, hoping for a good ‘night’s’ sleep. This time, they actually got their full eight hours in; it was now 14th August.
Refreshed and revitalised, the party decided to set off for the gatehouse once again.

This time, Elysia sent Relic in to scout the gatehouse and see what opposition was  there. Unfortunately,  the gnoll archers gave him a welcome he would rather not have had and one of their arrows nicked the little pseudo-dragon. Whimpering, he hurtled back to his mistress, where Ferros cast healing on him to restore the damage.

They arrived at the bridge and started moving across. Elysia took Ferros with her on her airborne attack. Waiting for them on the battlements were six fresh gnolls and a minotaur with no scorched arm this time. The party approached the gate but as they did, from a side door just before the bridge appeared the first (singed) minotaur and six gnolls, cutting them off. The opposition had been using their brains and deploying their forces wisely.

As if that were not bad enough, the gate opened and out came seven hyenas, yapping and baying, heading straight for Alurax. Galadeus declared his intention to use his Ring of Mammal Control but unfortunately for him, before he could use it, a hail of arrows sprang from the slits in the gatehouse walls and felled him.

Ferros’ zombies took up a defensive line across the bridge, with Alagon and Gullhar in support.

On the battlements, Elysia managed to Sleep the gnolls that were facing her and Ferros. The cleric hid behind her Shield for protection while she stood up to the Minotaur. He hacked at her with his huge halberd but missed; she took off with Ferros attached but of course in this mode, she could not use any spells since her arms were otherwise occupied.

On the bridge, two of Ferros’ zombies were hacked apart as the gnolls closed in. The minotaur took hits from Gullhar and Alagon.

Elysia landed next to Alurax and tried to sleep the hyenas but only one succumbed to her magic. Ferros touched ground with her and ran to the side of Galadeus, who he restored to consciousness with a Healing spell. Meanwhile the arrows were flying thick and fast, hitting more or less everyone on the bridge, apart from Ferros.

The minotaur facing the zombies was felled with a precisely directed arrow from Gullhar and the zombies counter-attacked the gnolls. However, two more were chopped apart before Galadeus could command the hyenas on the bridge to attack their gnoll masters.

The hyenas chased the remaining three gnolls up the passageway and there was the sound of yapping, baying and screaming before all went quiet in the darkness. There was no time to think about that because from the still-open gate came the sound of a bellowing minotaur and three more gnolls. Alurax charged in and there was a bout of fierce combat before the battered fighter staggered back and fell to the ground on the bridge side of the gate. The heavy doors of the gatehouse slammed shut and the party withdrew again. The two surviving zombies took arrows as parting shots but still staggered on, damaged but mobile.

The party withdrew into the passageway on the far side of the river again, with Ferros using more healing to restore some of the damage that Alagon and Alurax had taken.  They were understandably shocked; they had made two attempts to take the gatehouse and neither had been successful. Elysia and Alurax had come close to incapacitation and Galadeus had been severely injured. They would have to choose; take on the gatehouse a third time or try somewhere perhaps a little less dangerous for their next foray into the darkness.

Posted by Daddy Grognard at 08:30 3 comments