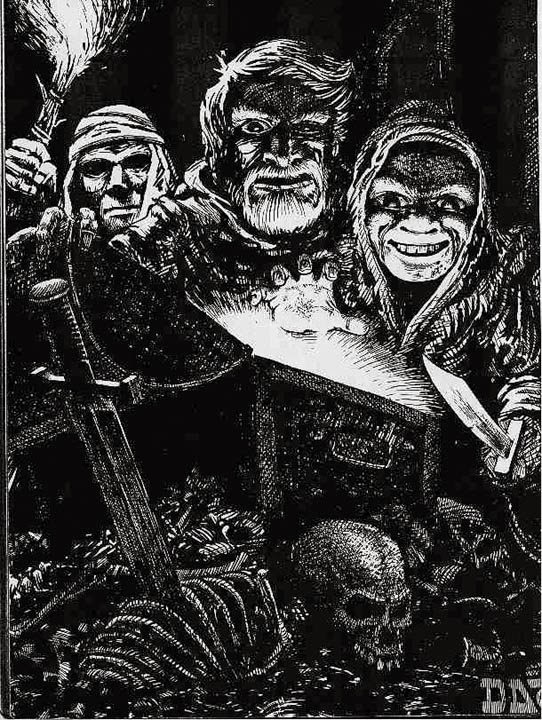 Very sad to hear of the death - at such a horribly young age - of Dave Trampier. For my money, he was the best artist D&D had; his illustrations summed up how I visualised my dungeons and the one above is for me, THE archetypal dungeon scenario. He was a man who helped to make my memories, and is now a memory himself but what images he's left behind for us to remember him by.

Posted by Daddy Grognard at 17:02 0 comments

An Adventure for Every Monster - Dinosaurs!


(with thanks to Arthur Conan Doyle)

The party is in a frontier town when they are approached by two rough, tough adventurers (at least a couple of levels higher than them) who explain that they are in the business of running hunting trips for bored nobles. Their previous security detail was seduced away by the lure of a large dungeon complex and they are in need of fresh volunteers to provide the weaponry and combat expertise for a new trip that the adventurers are planning.

Provided that the party is up for this, the two men arrange for them to meet up at the town gates in two days’ time, with their equipment, weapons, armour and supplies. The trip will probably take at least a month, the adventurers advise.

Two days later, the party is met at the town gates by their two new friends and a gaggle of rather uninspiring individuals, clearly wealthy and rather indolent, with their servants and retinues in tow. The nobles in question are diffident and will not speak to the party, seeing them as ruffians and too uncouth to bother with.

The voyage begins rather uneventfully; the town is in an area which, whilst technically wilderness, has been cleared out of any menacing monsters some years ago. However, once the party has covered the safe part of the journey, the terrain becomes rather more difficult; the hills become steeper and the going much tougher. Eventually, the two adventurers announce that they are nearing their destination. The next day should show where they are headed.

And indeed it does. Coming up over a rise in the trail, the party can see ahead a huge plateau rising above the wilderness. It looks big from where they are standing but it must be absolutely massive close up. The distance to the plateau takes at least two days to cross but when the party arrives, they will be scratching their heads about how to get to the top.

The two adventurers have the answer; they have been here before and know a way up the towering cliffs. They explain to the nobles that there will be no chance of carrying up all their equipment, so everything non-essential will be left at the bottom for their return. The nobles will balk at this but the two men know a cave in the cliff face that is easily concealable and suggest that all their equipment is placed in there.

With that out of the way, the ascent can begin. The path is steep and difficult but nothing that an experienced party can’t handle (rolling 1 on a DEX check is probably the only thing that can go wrong here). The climb will take the best part of the day – if the party has started any later than mid-morning, then the sun will set while they are still on the path. The DM can inflict penalties on the group but chances are the servants and retinue will pay the price, rather than the party.

And so the party will reach the top. The interior of the plateau is a tumbled mass of jungle, rocky outcrops, rivers and lakes, the sort of thing that it will be practically impossible to negotiate by horse. The two adventurers now explain that this is the hunting ground – the prey are dinosaurs, which seem to have survived here by some inexplicable chance. The nobles seem very excited by all this and start to unpack their weapons. The party may be quite eager to try their skills out against huge beasts from the dawn of time. 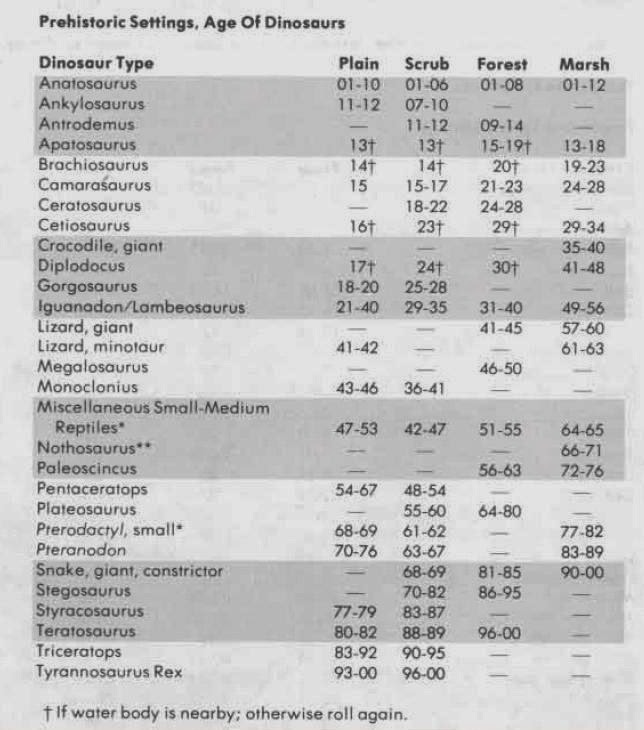 But all is not as it seems. The two adventurers have indeed been to this plateau before – as part of an adventuring party of their own. Whilst there, they stumbled across a temple complex inhabited by a native cult worshipping eldritch gods and were swiftly captured.  One by one, the captives were sacrificed in horrible ways and the experience drove the last two adventurers completely insane. They in fact became members of the cult and pledged their souls to the horrifying entities who were worshipped at the temple. To prove their worth, they suggested that they should return to the outside world and lure more victims to the plateau with the promise of hunting and wealth. This has worked twice already and now the third group of unsuspecting victims has arrived.

The two adventurers will contrive to lead the group closer to the temple but not so obviously that they raise suspicion. The natives will shadow the group to ensure that nobody escapes and then, when they ‘stumble across’ the temple, the trap will be thrown.

The natives will be skilled in bushcraft, armed with bows, arrows, spears, small knives and clubs. They will be wearing next to no armour. They will, in all likelihood have a shaman or priest (who will be the equivalent of an 8th level cleric) as well as tribal champions, probably 5th level fighters.  Their tactics will be to try and incapacitate rather than kill their enemies – this means they will reduce enemy parties to unconsciousness (minus hit points if you’re using that rule) and then bind them securely and use healing magic to bring them to perhaps 1 or 2HP.

The DM is encouraged to map and plot out the temple complex, although it will not be that large – perhaps a couple of levels. Being a lair of eldritch horror, it will have mysterious and eerie carvings all over the place and the holy of holies will cause detrimental effects to characters of strongly good alignments.  It may have guardians along the lines of Lovecraftian entities.

If the party is captured en masse, it may seem as though there is little that can be done to save them. However, it is possible that one of the nobles or one of their servants has managed to escape and could try to free one or more of the party. It is unlikely that they will be able to recover their armour and weapons unless they want to provoke a battle with the entire tribe. A tactical retreat into the jungle and some canny tricks and traps a la McGyver may be the best tactic.

There is of course treasure in the temple, but it will mostly be in the form of gold idols and artefacts which have been fashioned in the image of the eldritch nasties, so making them unsellable to any but the most dedicated scholars and collectors. They can be melted down for bullion value, of course. The property and belongings of previous duped parties were stored in the cave at the foot of the cliffs and later sold for profit by the two adventurer cultists.

If the party ends up due to be sacrificed, the ceremony should tax the sanity of all those present; those who do go insane may well end up as demented servants of the eldritch entities themselves and may join the two adventurer cultists on their next trip back to civilisation in search of more victims.

Posted by Daddy Grognard at 16:50 0 comments