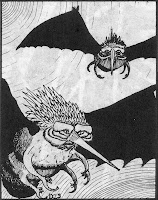 Yes, I said Stirges. You won’t be laughing when you see who they can take down.

Let’s have a look at their stats first.

HD 1+1 (that’s right, these little devils have the same hit dice as a hobgoblin)

Every round past round 4, the number of stirges who hit four rounds previously will detach and go off to enjoy their tasty repast (and probably a cigar or two and maybe some fine cheeses?)

Let’s do some quick calculations based on the AC of respective targets.

Orc AC6 Stirge to hit = 9 (60%) , Average orc hit points = 4.5. A stirge swarm of 16 attacking a gang of orcs would take out three on round 1, assume three stirges were killed, another two orcs the next round, assume another three stirges killed, another two orcs go the next round. Fourth round, down to four by its end but another orc killed, and by round 5, it’s more or less over for the stirges but they have killed eight orcs.

Okay, so orcs tend to hang around in groups which might make them a harder target (and believe me, it's a very good tactic when these little pests are in the air), but what about something a little heavier? Surely an ogre will be able to fend them off?

Let’s assume that of the 16 stirges, 9 hit and will therefore detach on round 4 to fly off and digest the blood.

So on round 1, 9 x 1.5 = 13 points of damage. Let’s be fair to the big guy and allow him to kill one stirge with each hand per round. Let’s also assume that he sees sense and kills the ones that have already attached, since they do the most damage (if he’s stupid and goes for the ones in the air, that’s his hard luck). Total number of stirges on him now = 7, total stirges in the air = 7

On round 2, the seven who hit last round and survived start sucking blood, at 2.5 average HP per round. Round 2’s damage therefore is 17hp. Of the other seven who didn’t hit, 4 will hit this time, although two will be killed by his fists. The four that hit will now do 6 points of damage.

So by the end of round 2, the ogre has taken 13 + 17 + 6 = 36. Our ogre is a dead ‘un. There are twelve stirges left in the flock, nine of which are drinking blood. Three are flying around just waiting for their meal.

But what if there are two ogres?

On round 1, the stirges split so that eight attack one ogre, eight the other. Ogre 1 suffers four hits, at 1.5 hp per hit = 6 damage. Ogre two suffers the same. Both ogres are able to kill two stirges apiece with their fists.

On round 2
There are now twelve stirges alive. Both ogres have two stirges sucking their blood (5 damage) and take another six hp apiece from fresh attacks. They are now down to 2hp left. They kill two stirges apiece.

On round 3, there are now eight stirges alive, four of which are sucking the ogres’ blood. The ogres take 5hp damage each and although they kill two stirges apiece (leaving four alive) both ogres are dead. Exsanguinated.

Not much better for the ogres.


Okay, let’s pit the littlest guys against the biggest guy.

So on round 1, 8 x 1.5 = 12 points of damage. As before, we’ll let the hill giant kill one per round with his hands, and as with the ogre, assume that he kills the ones that have already attached. Total number of stirges on him now = 6, total stirges in the air = 8

On round 2, the six who hit last round and survived start sucking blood, at 2.5 average HP per round. Round 2’s damage therefore is 15hp. Of the other eight who didn’t hit, 4 will hit this time, although two will be killed by his fists. The four that hit will now do 6 points of damage.

On round 3, the stirges attached (six from the first round, four from the second round, less the ones that the giant killed (2) = 8) will drink another 20hp of blood. The giant is down and dead but not before killing two last stirges that are sucking him dry.

So by the end of round 3, there are ten stirges in the flock, six of which are drinking blood. Four left over may well have a go at anyone else in the area.

So a flock of stirges can take down a hill giant in three rounds. And an ogre in two. And remember that this is the AVERAGE number encountered. It could be as high as thirty.

Oh, and if it was thirty, and we have a party of low-level (say 2nd) adventurers, average AC4, six in the party, average hp 11 each…. 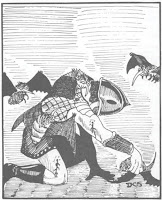 In round 2, the party took 33hp of damage, or 5.5 each. That’s a total per character of 9.25. Round three, there are ten stirges on bloodsucking duty. Twelve have been killed, meaning there are eight left to strike. Four hit, doing 6hp of damage. The ten doing the draining do 25 damage – the party kill six more. At the end of round 3, the party has taken another 31hp of damage, 5.16 per character. Each character has now taken 14.41 – they are all at minus hp and with no sign of rescue, they are a tasty meal for the stirges, of whom twelve are left.

"So, anyone else think we look stupid?"

Do not underestimate the power of the proboscis.
Posted by Daddy Grognard at 21:52