An Adventure for Every Monster - Devil, Lemure 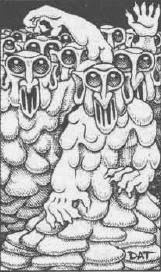 Lemures regenerate at a rate of 1hp per melee round so they are not usually destroyed by the wounds inflicted on them. They can be destroyed permanently only by blessed things (holy water, holy swords, etc). They are not subject to any form of sleep, charm or the like.

The party have been hired to (or perhaps have become involved with the efforts to) destroy a temple which worships a particular devil prince. Rumours abound of human sacrifice, sinister manifestations of diabolical power and an even darker secret at the heart of the temple.

The party should have little trouble defeating the cultists. They are mostly misfits and losers who saw the cult as a path to personal gratification. Their leader, however, is a different matter; a mid-level cleric who will give the party a hard time before ultimately being defeated.

But that’s just the start of this adventure. The dark secret at the heart of the temple is accessed through a hidden door behind the altar, and it is through this that the priest will dart. Down a shaft lies a network of tunnels, at the centre of which is a pool of oozing, festering slime, complete with semi-dissolved faces and slimy hands reaching out of it, etc. This is the pool into which the sacrificial victims’ bodies were dumped and now it has achieved a sort of semi-sentience.

If he is still alive, the priest will lead the party into the lower levels and once they are down there, he will throw a switch that causes all the passageways out to be sealed by sliding stone doors. This is the signal for the slime pool to start disgorging horribly melted humanoid figures – the lemures, who will hunt the party down through the network of tunnels and seek to drag them back to the pool, where – if they are drowned in the slime – they will rise again as lemures themselves.  If the priest has been killed, then there will be a booby trap which will be triggered as the party explore the lower levels.

The lemures are, despite their weak stats, ineluctable in their efforts to capture the party and drown them in the slime. There are ways in which the slithering menace can be defeated but will the party survive long enough to find them?

Posted by Daddy Grognard at 08:30 1 comments

After a long absence...

Just to advise that I am still alive. However, I need to inform my readers that because of the demands of schoolwork on Junior Grognard, we have had to take the decision to suspend Team Adventure for a couple of months. It's not a decision that we took lightly, since we know that the players really enjoy it and were looking forward to it starting up again after Christmas.

I am still working on the Adventure for Every Monster series, which will be continuing soon. Since I'm not gaming (apart from running the CoC pbem), I've not got that much game-related stuff to blog about. But this blog is not closing down - posting will be intermittent until further notice.
Posted by Daddy Grognard at 18:16 5 comments