An Adventure for Every Monster - Displacer Beast 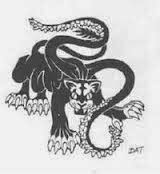 The party is approached by a man who needs their help urgently. He explains that following a terrible magical accident, a friend of his has been lost in the ever-shifting interdimensional vortex that surrounds the planes of existence. He needs to get her back before she becomes insane and mutated by the powerful energies that crackle across the dimensions. To do this, he needs to create a Displacer Beast King. Just like a Rat King, the Beast King consists of a number of Displacer Beasts joined together at the tail; they then acquire power beyond those of normal Beasts and can rip holes in the fabric of reality when they jump.

If the party can find and capture sufficient Displacer Beasts to make a Beast King, the party’s new friend says that he can join them together. All they have to do then is wait for the Beast King to make its first jump and then enter the vortex.

All is as represented; the party’s first big task is to find and capture a number of Displacer Beasts. That’s not going to be easy, considering they can displace themselves at will.

If the party can complete this stage of the mission successfully, then they will find their new friend more than able to carry out his part. When the appropriate magic is used, the tails of the Beasts will fuse and they will become a Beast King. The first displacement that the Beast King makes will indeed rip a hole in reality, allowing access to the interdimensional vortex.

This is a wild and frightening place where the laws of physics and indeed, reality in general do not work, or work in very different ways. Matter itself can be distorted and warped. The party’s friend will use possessions of the missing woman to try and locate her which should work well enough. What she will be like when she is found is another thing. The DM can decide or roll a d6 to find out.

1. Relatively unaffected; traumatised and with perhaps a phobia or two. Will return to normal once brought back to the Prime Material Plane
2. Temporarily insane due to the things that she has seen; this will last for 1d12 weeks once she returns to the Prime Material Plane, during which time there is a chance, albeit small, that her ravings will reveal important information about dimensional travellers and goings-on in other planes.
3. Permanently insane – as above, but there is no recovery possible (unless it be by wish). The party’s friend will be upset but will still pay the party their fee.
4. Mildly warped; will have randomly decided body part twisted or moulded into a new appendage, or will have acquired an ability similar in character to a mutation.
5. Severely warped; will be different in body shape (but still human in flesh) or may have acquired extra appendages, limbs or heads. Very unlikely in this instance to be sane.
6. Transformed; has become a different substance, perhaps rock, jelly, slime or similar. What little consciousness there is left will be wholly mad by now. There is a good chance that she will attack the party and her old friend.

The DM should also keep an eye on how long the party stays in the interdimensional vortex; too long and they too will start to exhibit the same symptoms. They may well see things whilst there which will affect their mental stability; the DM can be inventive and use whatever sanity rules exist in his/her campaign.