To begin with, the dungeon, as I’ve previously mentioned was a mere sixteen rooms large. I had skeletons, giant spiders, goblins, kobolds and – in the last room – zombies. A nice mix that would give the fighters and the clerics something to do. There were also pressure pads and locked doors that the thief might be able to assist with. I also set up the levels so that there were three ways down – the shaft, using rope for climbing, the stairs – the more conventional way, and the underground river, which would require a roll to check that they had not lost consciousness on the way down. I put a crotchety old man on an island in the middle of the underground lake to serve as a bit of a sanctuary, albeit a temporary one and perhaps give a bit of advice if the kids were confused or lost. I also had a statue in room 10 that held a mace that would do double damage against skeletons and a set of statues in room 5 that would animate if pressure pads were triggered, capturing PCs and taking them to the cells in Room 11, a destination to which the skeletons would take anybody rendered unconscious by their attacks. 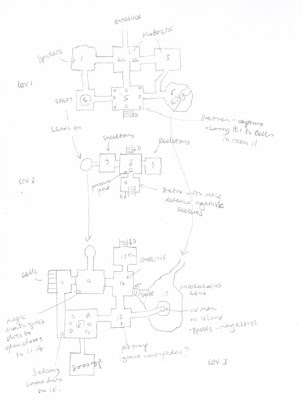 Eventually, I was sure that the party would reach the final room, 16, where a set of six coffins awaited, each containing a zombie. In the centre of the ring of coffins was a hole that matched the skull pommel at the end of the mace from room 10. This would open a trapdoor which led to a room containing 3000gp, about 500 for each member of the party.

Of course, predicting what a party is going to do has caught out better DMs than I, and so I had to face the possibility that they would reach this room sooner rather than later, gain the treasure and then ask for more without having experienced enough of dungeon-delving to be prepared for it.

With this in mind, I changed the treasure room into an octagonal chamber with the stairs from the zombie room entering it on the ‘north’ side. A passage ran from it eastwards and another westwards. On the south wall was a dial with five settings, and I made notes to which setting triggered which effect – behind four of the doors were ghouls, the fifth gave entrance to a treasure chamber but this was guarded by a poisonous snake. Settings 1 to 3 opened doors 1 to 3, discharging one ghoul at a time, Setting 4 opened all the ghoul doors at once and Setting 5 opened the treasure door. They managed to pick Setting 5 first and, having killed the snake – Junior Grognard did it 10 points of damage with one hack (although it bit the magic user, who went to 0 at once) - got their hands on the gold. They were mightily pleased with this – their first big score, after some piddling yields from looting dead goblins and the like.

This was more or less the end of that particular session – we’d taken two sessions to get down to this point. At the start of the next session, I announced the new rule on damage, because it occurred to me that unless there was some prospect of death at some point, the characters would just keep on coming back healed and never fear anything worse than 0hp and unconsciousness. I therefore ruled that damage sufficient to take a character to –10 or more would mean that they were dead and would have to be raised, which I priced at 5000gp. This had the effect of reminding them that they could be killed but it was unlikely and reducing the amount of gold that would eventually start sloshing around the adventure.

However, as we shall see in future sessions, this was not quite how it worked out in practice.

I tend to carry scrap paper around with me in various pockets and scribbled down a wealth of ideas as to where the two passageways off the Ghoul Room would lead. I riffed off a load of old memories of dungeons gone by, with one particular feature being a wide passageway visible from iron grille windows in a corridor that ran across and above it. The trick of course was to work out how to get down to it before finding out where it led. This was, incidentally, the point at which the party got to roll their Strengths (the fighters had already been allocated 17 or 18 by me at the pre-gen stage)

I started to jot down some ideas for areas as well. An orc complex with bugbear support, a fiery pit with a secret passage concealed within, a stranded funeral barge with a wight inside, a feature called the Gate House, which guarded a bridge across a raging underground river (that incidentally led from the lake with the old man on his island) and would serve as a pinch point for parties trying to move east into the dungeon areas beyond. A list on my piece of paper also covered 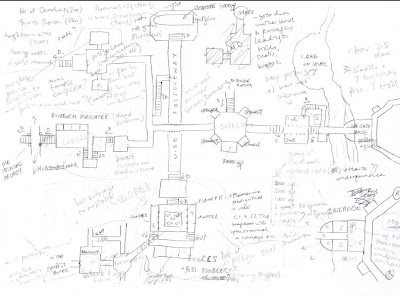 Having sketched out ideas, chambers and corridors for as far as I could envisage the party getting, it was time to open up the dungeon and let them start exploring.
Posted by Daddy Grognard at 09:00