When I was young (okay, around nine or ten) the British publisher Armada, who regularly brought out titles for kids, had a series going called the Ghost Books. They were compilations of short stories on a spectral theme, edited by Mary Danby who also kept the editor's seat warm at Fontana's Horror Stories department.

The stories were pretty good for kids' fiction (as we've seen on Fridays past, the British of the 1970s had a peculiar notion of what was suitable for children) and the covers were a mixed bunch that probably didn't do the contents justice.

Except for this one.. 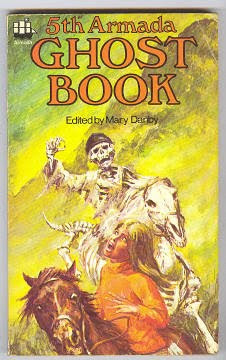 I'm not sure what it was about it - the sickly green background, the skeleton rider reaching out menacingly or the look of sheer malevolence on what was left of its face but that cover absolutely terrified me.

In fact, it frightened me so much that my sister, whose copy it was, had to cover it in brown paper so that I didn't catch sight of it by accident. When I went into the school bookshop to browse (I must have been thirteen or so) I caught a glimpse of it on the shelves, fled and didn't come back for a long time.

Flash forward to 2010 and the middle-aged me is trying to think up a subject for the Fear on Friday slot. I'd seen the cover previously in thumbnail on Google images and if truth be told, I had a shiver even then. Was it still as scary as back in 1974 or was it just my memory of being so very scared that was making me edgy now?

Well, I bit the bullet and whilst it's an unpleasant image to contemplate (and I can see why it might have given a nine-year old a fright) it's no longer the stuff of nightmares.

But if I'd steered clear of that picture because of what I remembered feeling, part of me would always be nine years old and terrified.
Posted by Daddy Grognard at 13:00