An Adventure for Every Monster - the Anhkheg 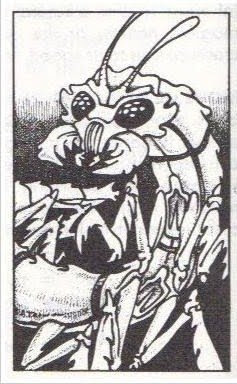 This adventure takes place in an area of the campaign world that has been newly-won from the wilderness and is now in the process of being civilised.

The local lord is a high-level fighter who has now established his stronghold but is currently occupied with humanoid incursions and has little strength to spare to investigate the recent reports of anhkheg attacks in an area that he has subcontracted to local farmer settlers (he had promised them safe land and low taxes and is worried that if they don’t get the first, they may stop paying the second).

Into this situation have arrived a 7th level druidess and her 2nd level ranger associate. The druidess is concerned about the imposition of order on nature in the area and, having familiarised herself with the goings-on has decided that the anhkhegs must be assisted in their disruption of the farmers’ efforts.

Meanwhile, other forces are also eyeing up the situation. A neighbouring lord would very much like to acquire the land cheaply for his own purposes through anonymous agents and is therefore using subtle persuasion and not-so-subtle efforts to encourage the druidess in her campaign to drive the farmers out. The manipulative lord has of course realised that once the farmers flee, the druidess will continue her efforts against anything he tries to do to the land and therefore has laid plans to have her disposed of once she has fulfilled her purpose. He has hired an assassin to shadow the druidess and the assassin has a philtre of love which he intends to use to woo her away from her mission and ranger associate so that she can be more easily killed.

The farmers have also organised a low-level militia but it is woefully under-equipped to deal with even a 3HD anhkheg, let alone the full-grown version and at least three of its members have disappeared near the forest edge (the doings of the druidess).

Because of the very low intelligence of anhkhegs, the druidess has found it very difficult to communicate her motives to them and so has to content herself with fighting on their behalf and keeping out of their way if they get nasty.

The anhkheg lair is an old sink hole - near some limestone cliffs - that is now heavily overgrown at the top and very difficult to spot (unless you happen to be a ranger). They are unlikely to be in the lair but if they are, the youngest and smallest are the ones most likely to be present.

Treasure type C will be scattered throughout the sinkhole complex – no neat little bags or chests to carry it home in.

Treasure type C is a low-probability combination so the DM may wish to increase the chances of coin being present but keep it scattered so that the party can accrue wealth but will have to spend a long time in the lair (with the chances that more anhkhegs will arrive whilst the search is ongoing).

The anhkhegs’ hit dice are as follows

If the party locate the lair and find the smaller specimens present and attack, there is a chance that the cries of the young will summon either Anhkheg 5 or 6 – (15% each round) – if they do arrive, the threat to the young will enrage them and they will attack at +2 on the to hit dice.

The party may find that there is a good price to be had for the glands that produce the digestive acid. Dwarves and gnomes find it excellent for etching designs onto particularly tough metals.

Weapons
2 daggers, +1 (these travel as a pair and are known as Seeker and Biter. The former, when held in the hand gives the wielder the power of a clairvoyance spell but only if he or she is standing on bare earth or rock – paving stones or flagstones will stop the effect. Biter, if thrown and a score of two higher than needed to hit is achieved will stick in the body of the target and if pulled out, a second damage roll must be made as hundreds of tiny spikes protrude from the blade)
Hammer, standard weapon
Scimitar +2, known as Greenfang due to the green tint of the metal. As the DM wishes, it may have some druidic or nature-related power.
Sling and bullets

Other equipment – a shoulder bag with several bottles of decoctions from plants and flowers, some of which have medicinal properties (count as Potions of Healing) and others cause sleep (as per the spell of the same name for whoever imbibes it), hallucinations, coma, etc. (DM to adjudicate these)

The ranger looks up to the druidess and is keen to work with her to further his own career as well as serve the cause of nature. However, he is zealous in this latter cause and will take it badly if he feels the druidess is going soft on her mission.

DG note - further to comments last week, please feel free to change bits of this adventure idea if it makes it easier to incorporate within your campaign setting. If your party needs an added incentive to get engaged with the adventure, slot one in.
Posted by Daddy Grognard at 10:00