An Adventure for Every Monster - Ape and Carnivorous Ape 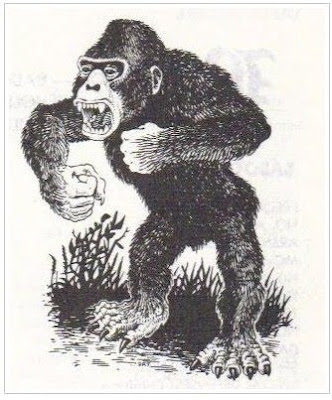 This adventure takes place within a part of the dungeon that is subject to the movement of military forces. The leader of the force has acquired and trained a group of apes, both gorillas and the carnivorous type to act as shock troops in clearing out troublesome areas of the dungeon where he was not prepared to risk human lives. 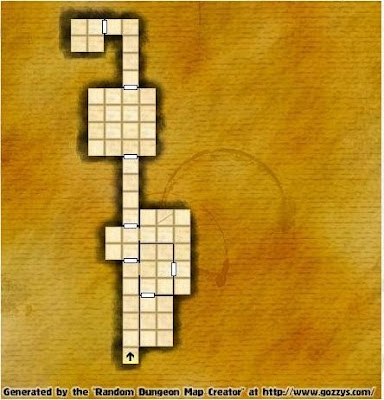 The main military force came across an ogre and a band of orcs in this section of the dungeon and decided that it was time to test out their ape squad. Sure enough the apes made short work of the humanoids but it was at this point that the human plan went wrong. The carnivorous apes realised that their fighting prowess had equipped them to acquit themselves well in combat and decided to turn the tables on the humans, who had used particularly brutal methods of training to bend the apes to their will. In the confined spaces of the dungeon section, they attacked and wiped out the human follow-up troops (squad of 12) and a search party that came after them (group of 4). Therefore, areas of the dungeon complex will be filled with gnawed human bones, half-eaten limbs and such like. The smell will be particularly nauseous. The military is not prepared to send any more troops to their doom.

There are two possible routes of entry into this adventure – the party may encounter the military force and be hired to go into the dungeon section and take out the apes, or they may wander into this section unaware of what awaits them. That having been said, the military may well not wish the party to know what awaits them, regarding the existence of trained apes as a classified matter. A sadistic DM may well decide to have the military turn on them if they survive the encounter (although a veiled clue or two may well be offered – if the party fail to spot it, bad luck to them)

Whilst the apes were not given weapons as such, they were equipped with basic armour, such as breastplates, helmets and the like, which will improve their AC by two (or one if the DM considers two overly generous). However, they have now obtained weapons from the fallen orcs and ogre (so typically large spears, clubs and axes for the ogre, swords, axes, spears and polearms for the orcs)

The apes will be organised into three squads, each with a carnivorous ape at its head. Such is the fear and disposition of the gorillas that if the carnivorous ape heading up their squad is killed, they will either bolt for it (40%) cower in the corner and hope to be left alone (45%) or continue to fight, having come to regard the carnivorous ape as part of their ‘family’ (15%). Whether the party chooses to take advantage of this or go for mass killage is up to them.

The carnivorous apes are cunning and have taken on board the tactics and methods used by their human trainers. They will therefore set their responses for military assault rather than a dungeoneering party attack.

The allocation of type C assumes that the carnivorous apes are acting independently and in this case, that does not apply. However, during the occupancy of the orcs and ogre, the small room at the top of the map was used to store loot and this has been discovered by the carnivorous apes. They know that treasure is valued by humans and are also aware that this gives them power but have not yet worked out how to exploit it.

The hoard consists of

Treasure type C – we have already discussed this treasure type in earlier posts.
Treasure type O (low-probability and low-value. The apes may well not have worked out the difference between the values of the various types of coins)
Treasure type Q x 10 (a gems-only treasure type. This will perhaps attract the apes more than coinage)
Treasure type S – a magic-only treasure type, in this case, potions. It should be considered whether the carnivorous apes have the intelligence to work out what the potions are; it would be very unlikely that they would have a way to identify them even if they did deduce their function.


DG note – from this week, I’ll be including the THAC0 and XP value to increase the utility of these posts.
Posted by Daddy Grognard at 10:00