This week, I’m going to be talking about red herrings.

First, however, a very important fact – in a CoC pbem, there are no red herrings.

But how can this be, I hear you cry. Surely red herrings are one of the crucial factors of any investigation-based game? Otherwise, every clue would point to the solution and the adventure would be over before it had begun.

Except of course that in our sandbox model of adventure construction, there is no pre-determined solution and therefore the party cannot be diverted from something that does not yet exist.

All right – let’s redefine the topic of conversation. Let’s call them the alternate possibilities of the adventure. Things that don’t seem to relate to the direction that the adventure is taking and yet, if spotted and followed can lead to what might seem to be a blind alley of investigation.

At every nexus of decision and possibility, there are usually two and often more choices that can be made. A railroad adventure has already made its mind up about which direction it’s taking and therefore which choice is to be made (and rewarded) and which are not to be made (and penalised if taken). Although it might seem that offering the party numerous choices is multiplying the workload of the Keeper, we’ve already seen that by staying a couple of moves ahead of the party and having the reaction time in days rather than minutes, this is not the case. Therefore, the Keeper’s attitude should be not be “I’ll give you a blatantly obviously relevant clue and two or three that clearly have no relevance to the adventure and can therefore be discarded or ignored” but rather “Let a hundred flowers bloom”

Of course, the last thing that a Keeper wants is for the party to be overwhelmed by choice – therefore, a sense of proportion is essential. Perhaps four or five leads that might result in something significant if the party chose to follow them up is fine. This also means that the entire adventure is not stalled if the party encounter a lead that they cannot, either through luck or misapplication, solve or deduce on their own.

It is a thrilling experience, albeit somewhat nerve-wracking to watch an alternate possibility take on a life of its own if the party decides to follow it up instead. A flexible Keeper will be able to flesh those out and be happy with the adventure going in a completely different direction. It may turn out that the adventure in its final form has virtually nothing in common with the direction that the Keeper originally intended. So much the better – it will be an adventure in which the players feel they have an investment of time, effort and imagination (and of course, the Keeper can gleefully point out that if they all perish horribly or end up insane, they have no-one to blame but themselves)

As well as active and immediate alternative possibilities, the Keeper should also toss in references which may have nothing to do with the current adventure but which broaden the game world that little bit more. These might be called displaced adventure opportunities, since they can either be followed at once (if the party feel like it) or noted and kept for later. Such is the nature of sandbox CoC that these references can often take on a life of their own even if they are not taken up immediately. The living nature of a sandbox world means that displaced opportunities will develop and change with time and the adventure a party takes up eventually may be different in many respects from the one that they might have encountered had they acted on the reference immediately. And if the campaign is a multi-Keeper one, a new Keeper may want to pick up an aside in the previous Keeper’s adventure and flesh it out into a full-blown adventure of their own.

Of course, it may be that there are alternative possibilities and displaced opportunities that are never taken up. Such is the way – there’s always more that the Keeper can invent than can be investigated even by the most active (and fortunate) party. That’s fine – they can become a part of the tapestry that makes up the world’s backdrop. Other parties, NPCs and the like may choose to investigate them, becoming either successful investigators or – more likely – horribly mutilated corpses to be encountered by a future band of player characters. All the more affecting if the NPCs were known to the players and with it, the realisation that it could so easily have been them. 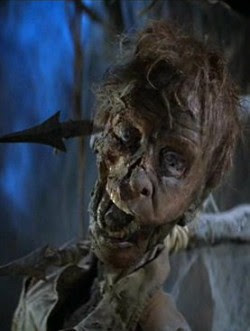 "Do the smart thing - let somebody else try first"
Posted by Daddy Grognard at 09:00