An Adventure for Every Monster - Carrion Crawler 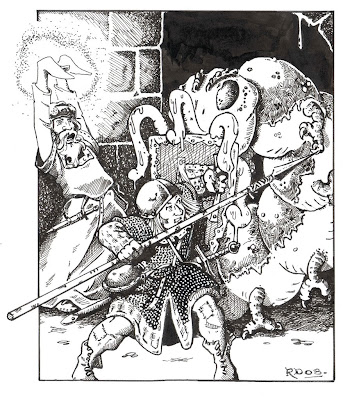 Frequency Uncommon
No. appearing: 1-6 (but for this adventure, use as many as you feel will provide a good scenario)
Armour class: 3/7
Move: 12”
Hit Dice: 3+1
Percentage in lair: 50%
Treasure type: B
No. of attacks: 8
Damage per attack: Paralysis
Special attack: As above
Special defences: Nil
Magic Resistance: Standard
Intelligence: Non-
Alignment: N
Size: L (9’ long)
THAC0: 16
XP value: 580 + 4/hp

The party have been called in to investigate the disappearance of a group of travellers in the mountains. Reports from the sole survivor indicate that they stopped to shelter from a storm in a large cave. The survivor went out to investigate a disturbance from the horses and when he returned, his fellow travellers were gone. All their equipment and weapons were undisturbed and the fire was still burning.

The survivor can guide the party to the cave in question, which is large and dry, sheltering under an overhang. He does not wish to go back in but will do so if pressed.

At the back of the cave is a large hole in the wall, circular in section and about ten feet wide. If the party take this route, they will find that it descends in a strange and random fashion, offering few clues as to its maker. However, after about a hundred feet or so, the party will encounter several side passages, fissures in the rock.

Following any one of these (for they interconnect, although the party will not know this) will lead them down into tunnels of ever-decreasing width until they arrive at holes that are perhaps eighteen inches to two feet wide.

Those holes are just wide enough for a character to crawl down, sans armour, equipment, etc. They are also just wide enough to accommodate a carrion crawler, which is what lives in the confusing labyrinth of tunnels and caves. Various side branches open onto every tunnel, which will enable carrion crawlers to attack from flanks and behind.

The original group of travellers were attacked, paralysed and dragged down into the labyrinth. Within the tunnel system are several small caves, perhaps ten feet high by the same width, in which the travellers were placed and eggs laid inside their bodies. The hatching process will begin shortly after the party begin their descent into the tunnels, with the accompanying sound of screaming as the travellers are slowly eaten alive from within.

The process takes 1d12 hours, with higher scores indicating that the crawler larvae have managed to avoid damaging vital organs in their feeding. If a parasitised host is found before they are wholly devoured, there is a chance that they can be saved; a Cure Disease is needed, which will cause the larva to flee the body. The victim will need to make a System Shock roll to survive the process as the larva literally bursts through the victim’s skin. Even then, they will need a Cure Critical to repair the damage caused by the larva.

The Monster Manual does not give a specific duration for the paralysing effect of the tentacles, nor indeed a way in which the effect can be combated. The DM can rule on this one as their taste dictates. I would hazard a guess that if the save vs. Paralysation fails, then the victim is paralysed for perhaps anything from half an hour to two hours. (3d4 x 10 minutes.)

The treasure that the Carrion Crawlers have amassed is incidental to the victims on whom they have fed over the years.

2145cp; a clutch of twenty of these have small holes drilled through their centres where they were once hung on a necklace by a bunch of hobgoblins
887sp; five of these are different in shape and design and have on one side, the picture of a crouching sphinx and on the other what appears to be the head of a woman wearing a blindfold. The legend is in glyphs that are only decipherable with reference to a sage. It is up to the DM to decide to what this refers.
643ep
511gp. There is a small silk purse holding seventeen of these. If they are examined, they bear the head and legend of a heretic pretender during an ancient war and are worth perhaps ten times their assay value to the right collector.
1 x 25gp gem
1 x silver brooch pin with inset sapphires, worth 75gp. The silver is engraved with the legend “The Duchess stole my heart” (the DM can decide what this means, if anything)
+2 sword, the hilt of which is hollowed out; the pommel appears to be a large amber-coloured gem but is in fact fake and unscrews. Inside the hilt is a tightly-rolled scroll giving a hastily drawn sketch of a dungeon gateway with notes on the trap and a password to bypass it. The location of the gate is at the DM’s discretion, as is whether the dungeon in question has been cleared out or is still active.

I’ve tried to jazz the treasure up a little bit this time, along the lines of Ben Robbins’ dictum about having the treasure tell a story. Some hooks in the hoard there, perhaps.
Posted by Daddy Grognard at 09:00