An Adventure for Every Monster - Chimera 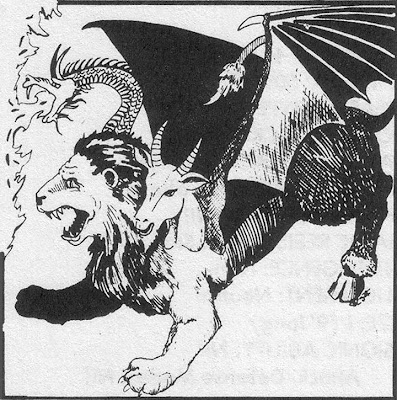 This adventure takes place in a rocky gorge high in the mountains. Through the gorge winds a track that, whilst dangerous, is still used by the local merchants as a trade route. However, recently, contact has been lost with two caravans and a fortified tower where a small garrison had been stationed to deal with bandits. The merchants have gathered a reward for the party if they will undertake to investigate and, if possible, eliminate the threat.

Little is known about the breeding habits of chimerae but one thing is certain – their fiery nature makes for a passionate mating season and that is what is happening in the gorge. A female chimera has taken up residence in a cave on the side furthest from the track and now two males have arrived in the area to vie for her attentions. Vying in this instance involves fights, demonstrations of physical prowess and delivering fresh meat to the entrance of the cave.

Over the past few weeks since the arrival of the two males, various individuals have entered the gorge but not returned. Their remains can still be found by the party when they arrive. The first is a hero who the merchants hired before they resorted to the party. His body, or what is left of it can be found scattered across a patch of rocks near the far end of the gorge. Nearby is the half-eaten body of a pegasus. The hero had a suit of magical chainmail (+3, 2000xp value) and a +2 Dragon Slayer sword (900xp).

The sword is known as Skyworm Splitter and its blade has a roseate hue to it. The hilt basket is intricately shaped and if studied, the pattern depicts a battle between a beast breathing fire and a man in armour and a winged helmet. It is +4 against all true dragons and does triple damage against red dragons.

He had signed up for the mission, convinced that the menace in the gorge was a dragon but was sadly mistaken although he never had the chance to find that out as his winged steed was knocked out of the sky by the chimerae.

The second individual was an evil cleric who was passing through with his bodyguards on his way to another destination altogether. The chimerae amused themselves with knocking rocks and boulders into his party and then swooping down, routing the surviving horses and finishing off the men at arms. The cleric leapt to what he thought was safety but a loose ledge gave way and he plunged into the gorge, his fall arrested by a sturdy tree halfway down. Unfortunately, whilst the chimerae could not get to him, he could not free himself and he starved to death over the course of a week. Round his neck hangs a Talisman of Ultimate Evil (3,500xp) and in his pouch is a scroll of Protection v Possession (2000xp) - a nice little reward for anyone who is brave enough to climb the hundred feet down to the tree, or the eighty feet up from the floor of the gorge. The bones of the cleric’s bodyguard and their mounts are either scattered along the road or at the bottom of the gorge, along with

In some thick undergrowth at the very bottom of the gorge will be found (if the party are making a detailed search) the rotting remains of a woman in travelling gear. Both her legs are broken and she died from the bleeding caused by internal injuries sustained in a fall as she tried to get away from the chimerae. Around her neck is a silver and gem-studded necklace that is worth a thousand gold pieces. She is the sister of one of the merchants who hired the party and was on her way to an important meeting with another merchant. Stuffed into a pouch near the body are several scrolls, encoded with a cipher that detail plans to set up a cartel to control the supply of certain commodities. The dead woman’s brother will want to see them returned or be certain that they have not fallen into the hands of rival merchants. He will hire an assassin of suitable level to follow the party and check to see if they recover the scrolls. If they do, and it is clear that they do not intend to return them, the assassin has orders to recover them by whatever means are necessary.

The small watchtower still stands near the southern end of the gorge and if the party approaches it from the track, they will find the gates closed and no sign of life. Gaining entry, they will swiftly discover that the garrison is no more; several burnt bodies litter the courtyard and the stable door has been smashed in. Bits of mouldering horse bestrew the floors inside. Two more bodies, killed by claws are shoved up against a wall.

If the party checks the rest of the watchtower, they will find more armour than can be accounted for by the bodies they have come across. A competent tracker will discover that a trail leads away from the watchtower into the rocky hills but an hour into the search, the remaining bodies will be found, horribly smashed as if dropped from a great height (which is exactly what happened).

Scattered across the scene of the fleeing guards is about a hundred or so platinum pieces, the property of the commander, who was one of the men who ran. Hunting for all the platinum pieces will mean that the party runs the risk of being surprised by the chimerae if they choose to attack at this point (rather than earlier as the party follow the trail)

Inside the cave where the female chimera has taken residence are various pieces of horses and bodies that have been deposited outside by the males and dragged in to be stored and enjoyed at the female’s leisure. Amongst these body parts can be found a leather pouch with three gems inside

A fiery orange jacinth worth 3500gp. This is known as the Sunset Stone and was looted from the crown of the Kings of the Elven Fastness some three hundred years ago. It is said that whoever holds the stone can gaze through it into the light of the setting sun and see the face of the person to whom they will lose their heart. Whether this is true or not is at the DM’s discretion.

A chrysoberyl that is worth 100gp

A red-brown spinel, with a value of 100gp

The pouch has a design on it that is the emblem of a particular noble house several days’ ride north of the gorge. Returning it to a representative of that house would net the finder a respectable reward and the favour of the noble family.

Further back into the cave in a pile of dead grass and leaves is a bottle in which can be found a potion of Diminution (300xp)
Posted by Daddy Grognard at 17:43