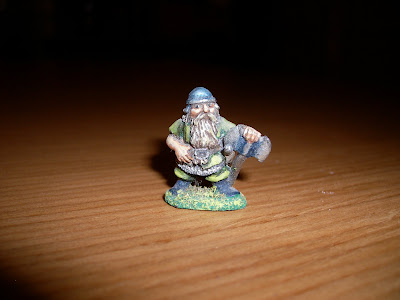 A long time ago, when Citadel Miniatures hadn't sold out and gone all Warhammer and White Dwarf hadn't done likewise, the former produced a selection of figures based on the characters in the latter. I have Thrud the Barbarian and Gobbledigook around somewhere but this one, the actual White Dwarf from the magazine's masthead is one of my favourites because it's actually one you can use in an adventure.

It's not wholly armoured (I do have a dwarf in plate but no picture of him yet) so it's given Andy a chance to do some non-metallic finishes. The trousers and jerkin that sits over the top of what you can see of his chainmail has been done out in a pale green, lighter than Lincoln - I'd call it sage. His metal cap has a tint of steel blue about it, as does the blade of his axe. Perhaps that's the colour that dwarvish steel is. They forge in mysterious ways, you know. Just ask Carter Soles.

The beard's texture lends itself well to a bit of highlighting and the brown of this chap's face fungus (tucked into his belt, as can be seen) has been dry-brushed in a sort of very pale cafe au lait. It gives the impression, to me at least, that this is not a particularly old dwarf.

Coupled to that is the non-combat feel about his outfit that makes me think that this is a dwarf in civvies. I suppose that they would wear some sort of armour about their persons even on their days off, but this is a dwarf who is not expecting a pack of Uruk-Hai to come haring around the corner any moment soon. Maybe he's taken the opportunity to pose for some tourists - humans or maybe even hobbits who've climbed all the way to the top of the mountain to see the dwarves.

We tend to have an image of dwarves as dour fighters, handy with an axe and somehow rather Scottish (thanks for nothing, Peter Jackson) although Tolkien said that he viewed them more like Jews - "at once native and alien in their habitations, speaking the languages of the country, but with an accent due to their own private tongue..."
(letter from Tolkien to Naomi Mitchison, 8th December 1955).

Jews with axes - interesting image. I've always imagined them in rather similar vein, having read that letter a long time ago (nearly 30 years now) although the notions of dwarves and beer remain inextricably linked in my mind. Not sure why - were they big drinkers in Tolkien or have I got my cliches mixed up again?
Posted by Daddy Grognard at 08:30