An Adventure for Every Monster - Demon, Type I 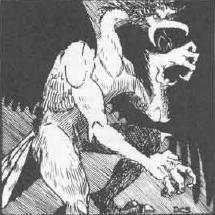 They may be struck by normal missiles and weapons.

The party has been hired to hunt down and eliminate a band of brigands who have been causing trouble in a remote part of the realm. A good bounty is given for each brigand but a particularly large amount has been offered for the head of the leader.

At a certain point in the hunt, the party will encounter the brigands but there is a twist. The brigands are in no way interested in fighting the party and – provided there is a chance to communicate – they will explain why.

A few weeks ago, their leader, who is both a tough fighter and a fair to middling magic user found a battered codex in a raid on archives of an ancient monastery. As he and his band had killed all the monks and taken their stuff, there was nobody around to interpret it for him but he persevered and managed to decipher it. The codex gave him the ability to summon demonic forces and, using a couple of the less successful brigands as sacrifices, called up two Type I demons. The demons were tempted by the prospect of gold and flesh and proved very effective at raiding, looting and slaughtering. Many of the crimes for which the brigands are being hunted were actually carried out by the demons, under the control of their new master. The brigands eventually left their former leader in high dudgeon, having been effectively made redundant as the leader outsourced their duties.

The brigands have a proposition for the party; kill the demons and their master and the remaining gang members will relocate to pastures new. The brigands will also guide the party to their hideout although they cannot guarantee that their leader has not made some improvements to security over the intervening weeks.

There are several options for the true situation in this adventure

1. All is as represented. The brigands are genuine in their desire to see the demons and their former leader killed, although they will want a share of the loot which they regard as theirs. There is a possibility that the brigand gang has been infiltrated by members of the military or the local law enforcement and if this is the case, the arrival of soldiers at an inopportune moment is likely.

2. The brigands are lying through their teeth; they are working in cahoots with their leader and have been sent out to find new human sacrifices for the demons to consume. The party will do nicely.

3. The brigands are telling the truth as far as they know it but whilst they have been absent from the lair, the demons have grown bored of working for their master and he has now become their latest meal. The demons are now a more chaotic opposition but have not grown sufficiently tired of raiding and pillaging. They have tried several times to bring more of their kind to the lair but so far with no success. The DM should attempt a summoning roll once per day until the party reaches the lair; this may well increase the number of demons present.

4. The leader is fully aware of the activities of the brigands and is growing tired of the threat that they pose to his operations. He has improved security no end and made several alterations that will turn what the brigands thought were safe areas into death traps. Hiding behind this security, he will send the demons to kill the brigands first, then have them hunt down the party. Without brigand aid, the party may well become lost in the network of caves and tunnels that make up the lair.

As well as the coinage, there is a sizeable hoard of gems and jewellery but this will be securely hidden and trapped.