When the party woke the day after the night’s events, there was still a faint smoky haze on the air. The evidence of their blisteringly successful attack on the ogres lay all around them and they lost no time in breaking camp and setting off again. They were now entering a stretch of sylvan woodland and the raw power of nature unrestrained was evident to all. That afternoon, they had the sound of howling wolves from the woods around them but the creatures seemed reluctant to approach during daylight. That night, as the party was trying to select a good spot to camp, the sound of rustling in the undergrowth and growling met their ears. Elysia sent Relic out into the darkness to find out what it was; the pseudo-dragon came back to report that five brown bears were out prowling for food. Wisely, the party decided to relocate and tramped through the woods until the noise of the bears was far distant.

The next day, they were riding on when Alurax and Alagon, glancing into the sky for distraction from the endless procession of trees and undergrowth, spotted three creatures flying towards them. Curious as to what they were, they used the keen sight of Gullhar to get more details about them. He reported that they had the bodies of lions, the wings of bats and the heads of men. They also had long tails tipped with something that looked like the heads of teasels. 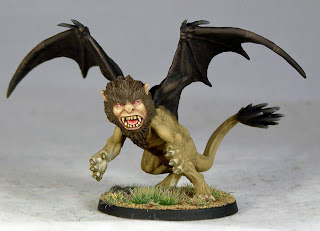 Thinking that the newcomers were sphinxes, Elysia flew Ferros up into the air above the trees to speak to them. As the creatures approached, they began to circle. Ferros prepared to open hailing frequencies but a moment later was riddled with vicious iron spikes and was brought back down very quickly indeed. The manticores, for such were they, moved in to take on the rest of the party. One was brought down before it had a chance to land, and the other two moved in, one taking some heavy damage. Elysia put up her Shield and the party bunched behind her to make use of it. Benbo and Alurax faced forward with her, whilst Alagon, Gullhar and the very injured Ferros kept to the rear; wisely, as it turned out for the second manticore rose up again to fly over the Shield and attack from the rear. The paladin, the elf and the cleric concentrated their efforts on this one whilst Elysia, Benbo and Alurax kept the manticore on the other side of the Shield busy.
One of Alurax’s attacks went awry as he moved in with his trident; he mishandled the shaft of the weapon and ended up sinking its points into the ground. He was able to extract it but delayed his participation in the attack.
Despite some damage suffered by several of the party, they finally managed to kill the two remaining attackers and felt quite pleased about it. The manticores had not even used their claw and bite attacks, restricting themselves to the use of their tail spikes but nevertheless, had proved themselves fearsome opponents. Benbo and Alagon decided to cut open the stomachs of the manticores to see if there was any treasure inside but were unsuccessful and a bout of nausea and vomiting ensued as they saw the results of their gruesome task.

For much of the rest of the day, there was little to trouble the party, save the howling of wolves and the renewed presence of brown bears, although it was not clear whether it was the same group or another one. The lack of either ranger or druidic capability in the party was starting to tell although no hostile moves were made by the wildlife that day.

The next day, the party had not been on the march long before they spotted a rocky outcrop not too far away, topped with trees. By what looked like a cave entrance, there lounged a manticore and another launched itself periodically into the air.  This was clearly the lair of the trio that had attacked the previous day and the party decided to investigate, Benbo leading the way with his thiefly skills. Unfortunately, he was able to move neither quietly nor covertly and the airborne manticore was soon heading his way to attack. Alagon, Gullhar and Ferros moved in to support the doughty hobbit and using missile fire, managed to bring down the manticore before it could unleash its deadly weapon.

This time, Benbo’s attempts to sneak up on the cave bore more fruit and whilst he was leading the party forward, Elysia and Alurax flew to the top of the outcrop to try and take the manticore by surprise. The party’s combined efforts succeeded, with Alurax making the leap onto the manticore’s back to finish it off with a stab of his trident.

Within the cave, amidst the bones that had been gnawed as part of the manticores’ feasting, the party found some valuable treasure, including scrolls, a magical cross-bow and an enchanted war hammer. These went into the party’s communal weaponry, to be used by all members as need dictated.

The fourth day in the sylvan forests started with what appeared, at first sight to be a simple combat. Alurax, at the front of the party was nearly taken by surprise as a huge, two-headed giant appeared in front of him. The ettin engaged the trident-wielding fighter in combat and the rest of the party moved forward to engage, only for Ferros and Benbo to fall under attack from a second ettin that launched a flanking movement, followed up moments later by a third, attacking from the rear. The final zombie, who had been traipsing through the wilderness with the party was smashed by two huge club hits and disintegrated into a cloud of rotting flesh.

Alagon, Gullhar and Ferros used their missile weapons whilst Benbo leapt into action with sword and dagger. Alurax kept his ettin busy with the trident whilst Elysia used magic missiles to whittle down the third. Soon, one ettin was down and the party concentrated their efforts on the remainder, killing one quickly – Alagon scored a decapitating hit on one but the second head meant that this did not automatically kill it. The ettins were having a very bad time of it, missing several easy targets with their clubs and doing a fraction of the damage of which they were capable. The party finally overwhelmed the last ettin with weight of numbers and finished it off.

The party deduced from the direction of the attack that the ettins must have come from the south and Benbo started to hunt around to see if he could find any sign of the trail that they would have left. It was not long before he picked something up and led the party through the undergrowth, keeping the trail in his sights until it led to a rickety old lean-to, built against a thick oak. The smell from inside was appalling, with rotting flesh, gnawed bones and unwashed ettin high on the list of nauseating aromas. Nevertheless, a good rummage in the ettins’ den revealed more treasure; this was in the form of a smattering of copper, silver and electrum and a tourmaline but beneath a pile of rotting furs, the party found a sack that held nearly five thousand gold pieces, a potion and a scroll.

Their sojourn in the sylvan forest had netted them a large haul of treasure and experience but they were not out of the woods yet.
Posted by Daddy Grognard at 10:07