An Adventure for Every Monster - Devil, Bone 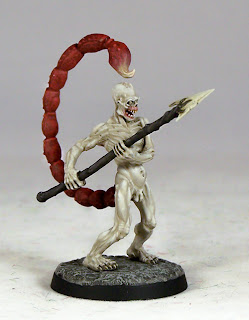 This adventure begins in what appears to be a perfectly unremarkable section of dungeon passageway. However, there is a nasty surprise waiting for the party; a pit trap of sufficient size that most, if not all of the characters are going to be caught in it.

They will be plunged down a shaft sufficiently steep that climbing back up would be difficult but not so deep that they would be incapacitated by the drop. At the bottom, they will find themselves in pitch blackness, not because the door to the pit trap has closed again (it has) but because the pit into which they have been dropped is under the influence of a Continual Darkness spell that has been made permanent.

The pit is merely one section of the Black Maze, a labyrinth of twisting, turning and sometimes dead-end passages, with a number of nasty features like doorways that open onto very deep shafts. Somewhere in the Black Maze there is the switch which will deactivate the Continual Darkness; all the party has to do is find either it or the exit (there is one) by fumbling along in the darkness, going by touch alone. Infravision or ultravision will work in the darkness, which is just as well because in the Black Maze are two Bone Devils, whose job it is to hunt down and despatch anyone who enters. They have infravision, ultravision, and they can also detect invisible.

They also have the powers of
Charm person
Suggestion
Illusion
Teleportation
Know alignment
Cause fear
Animate dead
Fly
Become invisible
Summon another bone devil (40%) – the DM could conceivably use this ability to restock the devils if the party gets lucky against one too quickly – not that a good DM would do such a dishonest thing!

Once a day, each devil can create a wall of ice, so they may well use that to block off sections of the maze to channel the party into a killing zone.

The DM can have a lot of fun with this one; remember that the remains of previous parties who didn’t find the exit in time will litter the labyrinth (which the DM can make as large as they wish). There are lots of opportunities for trips, bumps and nasty accidents – plenty of saves v DEX to be made here.  A good trick which the devils might try is to suspend the skeletons of their victims by wires from the ceiling of the maze so that the rattle of their bones might make the party think that a devil is in the area. Another nasty trick might be a patch of fungus or slime which is harmless in itself but marks the party member who blunders into it with a stain that is visible on the ultraviolet spectrum, meaning they’re even more visible to the Bone Devils.

It should also be remembered that infravision in particular may work well to see sources of heat but it’s much harder to spot things which are the same temperature as their surroundings. Like uneven slabs of stone on the dungeon floor.

Labels: adventure hooks, an adventure for every monster, devils, ideas