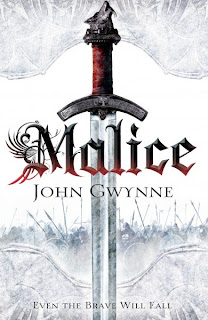 Another week, another big book (628 pages). Unlike Hawk Quest, this one takes a while to get going and I suppose that there are  readers who would have given up by the time the slow-burning plot really fires up. It’d be their loss because once it does get underway, the iron shackles of the quality writing grip and won’t let go. In tone, it’s similar to both Paul Kearney and Brian Ruckley; it’s also been compared favourably to David Gemmell but (and I know this is going to come as a shock) I’ve never read any Gemmell, so I can’t comment.

Gwynne has taken what appears to be the Dark Ages (always a plus in my book) and set his story there. The map seems to be based, in the North at least, on Europe – with the British Isles expanded slightly and attached to the mainland, similar to the way things were before the end of the last Ice Age. I’ve done something similar when designing a campaign map many moon ago, so I recognised it pretty quickly.

Into this familiar arena are pitched the protagonists; chief amongst these are Corban, a blacksmith’s son and Nathair, a prince with big ideas. Starting at almost opposite ends of the continent, they’re clearly on a collision course as kings, warriors and mysterious wise men are swept up in a frenzy of expectation at the imminent rising of champions of good and evil known as the Bright Star and Black Sun respectively. Add to that tribes of giants who haunt the huge forest at the heart of the continent and we’re set for hundreds of pages of good old-fashioned action – and there’s plenty of it to go round. One of Gwynne’s publicity shots has him sitting with two huge dogs (both of whom appear in the book) and a massive axe, so he clearly knows his stuff when describing the combat scenes. There’s blood in bucketloads and when he says, on the cover of the book ‘even the brave will fall’ he means it. There is, however – as far I could see – no foul language in the book so in this respect, it differs from other ‘gritty’ fantasy novels out there.

The book uses a single point of view per chapter, each headed with that character’s name. There are actually six individual point of view characters and that, to me at least, was perhaps too many. Gwynne could have pruned it down by two without losing any of the story’s strengths and a good case could be made for further pruning. Still, spending time with the characters means that what happens to them during the book does affect the reader more than if they had merely been referred to in the narrative of another. The structure does mean that on occasion, the reader has to wait a considerable number of pages before finding out what happened to a particular character, left dangling on a cliff-hanger.

If you’re prepared to put the effort in, Malice is a good read; I found myself making time to read on once the pace picked up and having been drawn in by Gwynne, I’m looking forward to the second book, Valour, due out in the UK early 2014.