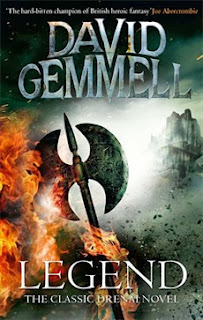 There’s late to the party and then there’s only reading this book this year. It was published in 1984, when I was just 19 and Joe Abercrombie was 10 (or possibly 9).  All this time, it’s been off my radar and only now, having read stuff that’s been compared to it did I decide to find out what all the fuss is (was) about.

So what is it all about?  Well, Legend can best be described as what might have happened if a 60-year-old Conan with a bad back and a gammy knee was drafted in to defend Helm’s Deep against the Mongols. If you feed that combination through the directorship of John Ford, you’ve got a pretty good idea of what to expect.

Of course, with a summary like that, and it being fantasy, you’ll probably be expecting action of the most military sort. To tell the truth, Legend has plenty of fighting but there isn’t an overwhelming amount of it. We get battle scenes in which named characters participate but the fighting isn’t where the real story takes place. That is reserved for the sections of the book where Gemmell peels back the outside of his characters and looks into their souls.

Having done this, he reveals that his characters are just as fallible and human as the rest of us. There are no larger-than-life heroes here, unless you count Druss, and even he has his shortcomings, although as a paragon, personifiying the virtues of nobility, sacrifice, duty and honour, he has few equals.

In essence, what Gemmell has done with this book is to humanise Tolkien, giving us people with whom it’s very easy to identify, rather than Kings and Princes with Destinies and magic swords.

There are flaws in the book, of course; Rek’s romance with Virae seems to progress very fast indeed whereas it might have been a better idea to have had them meet at Dros Delnoch and there find each other. The length of the book is perhaps not quite enough for us to witness the fates of various characters, some of whom are killed off-screen, as it were. But given that Gemmell is no longer with us, we’re unlikely to get a Director’s Cut of the book and so must be satisfied with what we have – and thankful for it.

Gemmell is lauded by those who came after him – less charitable souls than I might dub them epigones – and he has an annual fantasy awards ceremony named after him. There are many debates as to his legacy on fantasy with many claiming his standard and marching forward with it.

I suppose that rather than the vanguard of gritty fantasy as it is now defined, Gemmell was in fact the rearguard of heroic moral fantasy, where there was something larger than the character to which they could give allegiance, be that a principle or a cause.  It seems odd that he has been beatified by a genre which seems, over recent years, to have drifted away from the underlying values which made him such a popular and enduring author.