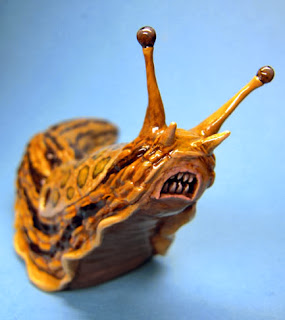 The giant slug (for such it was) emerged into the room; Elysia fired a Fireball at it and although it damaged the monster, it didn’t stop it. Alagon swung into action, moving in to attack the slug as it got a volley of arrows from Alurax, Ferros, Gullhar and Garry. It tried to bite at Alagon but missed; the party then fired their second shots and Elysia let rip with a Magic Missile; at 9th level, she could deliver some powerful blasts of magical energy and those, combined with the arrows that had been fired, finished the horrible thing off for good.

The party now had to decide where to go next; after some indecision, Ferros took the initiative and led everybody off down the passageway from which the slug had emerged. He was accompanied by Alagon, Garry, Gullhar and Wolf, with the others bringing up the rear.

As they reached the corner of the corridor, Alagon suddenly sensed a strong feeling of evil from the darkness ahead.  Reluctant to enter, Alagon slowly edged round the corner, with the rest of the party providing back-up. Gullhar scanned the room with his infravision but could see nothing.

As the party stepped into the room, four sinister figures came out of the gloomy corners. They were almost transparent and radiated sheer malice. Nobody knew what they were but Ferros knew that they were undead and raised the holy symbol of Foik, which drove them back into the darkness again.

Having cleared the room of opposition, Ferros spotted a dead body lying in one corner and before you could say ‘Foik’, said cadaver was part of the Undead Army. The party headed off down the passageway again, making sure that the sinister undead figures were not waiting for them.

At the end of the passageway, they came to a room where they saw two more bodies on the floor. Again, Ferros stepped in to animate them but this time, there was a nasty surprise waiting. As the two new zombies stumbled towards ‘Master’, Ferros and Alurax noticed that there were white worms writhing in the putrescent flesh. Ferros promptly turned them, which destroyed them and Alurax hurled an oil bomb in, roasting what was left of the bodies and the worms.

The team decided to exercise caution from thereon and checked the room out thoroughly. Alurax, who’d had experience of nasty things lurking on the ceiling, looked up and saw that there was a shaft opening directly above their heads. It was thick with cobwebs and darker objects moved within it. Alurax fired an arrow up into the webs and by chance, hit a spider which dropped down onto the floor, dead.  Alagon reached up and managed, by use of a torch, to burn the first few feet of cobwebs.

Having explored the only other passage leading from this room, which took them back to the clay jar chamber, the party thought that they had run out of options and decided to do what they had done on the previous level – send Gullhar round to see if he could find any secret doors. The elf set off back up the passage but he had only gone a little way when he met the four sinister undead coming towards him. He shouted out and alerted Ferros, who ran down to join him. The cleric raised the symbol of Foik again but this time, either his faith was lacking or the undead had grown bolder. They were not stopped and Ferros decided that discretion was the better part of valour. The party beat a hasty retreat to the room with the spider shaft, where they decided to make a stand.

The party deployed for action, with Wolf, Alagon, Ferros and Garry in the front row. Elysia and Elador were thinking about using their Teleport spells to take the party out of danger but then realised that with the weight restriction of the spell, they could only take one person each.

As the undead came drifting into the room, Elador recognised them as spectres. Ferros tried to turn them again but he had no luck this time either.  Elysia readied her Wand of Illumination and cast Sunburst which damaged but did not destroy the spectres. They closed in on the front rank of the party and battle was joined.

The spectres failed to hit Garry and Alagon but poor Wolf was hit and drained. As his lifeless body hit the floor, an eerie mist rose from it and started to take on the shape of a spectral wolf.

Just as one of the spectres loomed in with its claws to drain Ferros, Alurax fired a magic arrow from the back rank and the undead predator dissolved into the darkness, destroyed in a very lucky hit.

The next round, Alurax used the same tactic to destroy the spectre that had killed Wolf as it was moving in to attack Lydia. Elysia fired another Sunburst at the spectre that was trying to hit the very nimble Alagon and destroyed that.  The final spectre closed in on Garry and everyone thought the gnome was about to be drained but he managed to dodge the chilling grasp; Elysia tossed her wand to Elador who fired Sunburst again at the spectre and destroyed it.

That left the problem of the spectral wolf – Elysia took back her wand whilst Elador grabbed the fallen body and teleported out with it. It was his aim to return to the town, many miles distant and see if the Council of Elders could do anything for the fallen familiar.  A final Sunburst took care of the spectral wolf. The party had triumphed but not without cost.

Disturbed by the prospects of other monsters lurking on this level and waiting to attack, Elysia fired a fireball up the spider shaft, clearing it of cobwebs and other debris (including some human bones from less than fortunate previous adventurers), then cast Fly and carried the party up the thirty feet or so of shaft to a small room with a narrow walkway around the opening. A passage led off it and they followed this until it came out into a room in which there was a flight of descending stairs and two other passages. There were also three dead bodies in the middle of the room.  Ferros wondered who they were and decided to use Speak with Dead to find out. The corpses revealed that they were low-level adventurers and had been killed by the spiders from the shaft (Ferros had not really thought about the questions he was going to ask and only had two to use).  Satisfied that the bodies represented no threat, he decided to animate them. Unfortunately, not all threats are visible ones and as the bodies rose from the floor, their ghosts emerged from the mouldering bodies and advanced on the cleric who had the temerity to disturb them. 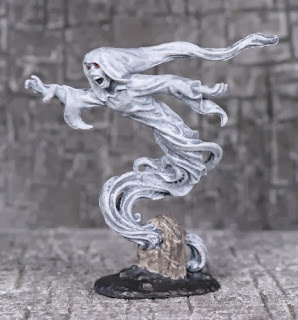 Ferros took one look at the advancing phantoms and shrieked, taking to his heels in terror – down one of the passageway that the party had not yet explored. He also aged ten years but that was the least of his worries. One of the ghosts followed him and the others homed in on Elysia and Lydia, who had assumed that their cleric would sort out this latest undead problem.  Elysia resorted to her usual tactic of Sunburst but unfortunately this did not destroy the ghosts fully. They struck at Lydia, turning her from an 18-year-old to a paladin in her mid-forties.  Elysia was touched by the second ghost and became 73.   She still had her wits about her because another Sunburst finished off the ghosts.

Meanwhile, Ferros had fled into a room where the first ten feet of floor was black and glistening. He failed to jump it and ran through it instead. His boots started to char and corrode and as he ripped them off, he realised that he was in a dead end. His plight concentrated his mind and he recovered his wits, only to see one of the ghosts drifting down the corridor towards him.  He attempted once again to use the power of Foik, but said deity must have been busy elsewhere, because the ghost just kept on coming.

Just as Ferros thought his number was up, Elysia appeared in the room, having teleported in. She fired a Sunburst at the ghost, who appeared weakened, though not destroyed and used a Fly spell to pick up the cleric and soar past the ghost. As they did so, the ghost reached out and made a grab for them. He touched Elysia, who went from 73 to 113 in an instant. She crashed to the floor and Ferros ran into the main room to alert the party to their magic-user’s predicament.  Elysia, in her dotage, now lay on the floor whilst the ghost decided to attend to the rest of the party who were a greater threat; he could always come back and finish off the extremely elderly magic user for afters.

The party prepared to defend themselves against what they now recognised as some of the deadliest adversaries they had ever encountered.
Posted by Daddy Grognard at 15:51