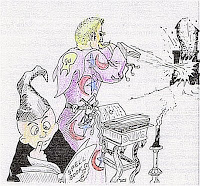 Now that I’ve been DMing again for a while, and having read copious amounts on the way of Old School, a conundrum has presented itself to me.

It is quite feasible that a player with a slightly higher than average intelligence, may well play a character who has, let us suppose, an INT of 17 or 18. Clearly, the character is more intelligent than the player.

So what happens when, as is common in dungeons, the DM wishes to present a puzzle challenge? One approach might be to say that a roll under INT on a d20 would mean that the character has solved the puzzle, but this goes against the maxim of Old School, ‘challenge the players, not the character’, and indeed reduces what is often a key feature of the dungeon to just a die roll.

So how should this problem be approached?

 Test the player – sure, but doesn’t this mean that the character’s INT score becomes rather meaningless as an indication of their intelligence.

 Abolish intelligence as a requisite – good idea on the surface, but doesn’t this mean that the Magic User then becomes a very difficult class to run as it no longer has a prime requisite.

 Ban players from running characters above their natural intelligence. Tricky one this. It’s almost like a kind of intellectual discrimination and besides, who judges player intelligence? It's a minefield, to say the least.

INT is not like STR. You can say I’m kicking a door open, or I’m bending the bars, and no-one expects you to actually do it. The DM might get a bit annoyed if the doors in his house are routinely broken off their hinges by players with the equivalent of 18/00 STR.

Puzzles, on the other hand, the bread and butter of Old School dungeons:

"4. At least one puzzle, trick, or obstacle that requires the players to figure it out, rather than being solvable by a die-roll"

And what if the DM is hopeless at making up puzzles? He might present the players with the D&D equivalent of the Gordian Knot or leave the main treasure chamber guarded by a problem that Elmo from Sesame Street could solve.

As a converse example, what if the player is running a fighter whose INT is way below his own? Is it fair to ask the player to restrict his own intellectual input into the game, just because his dice rolled low? Or should the DM ask someone who may not be capable of it, and would find it immensely frustrating, to role play a dimwit?

Junior Grognard is 6.5 years old and there is obviously a point beyond which his deductive powers are not, as yet, capable of going. I had to put on my thinking hat in one of our Training Dungeon sessions recently and devise a puzzle that would reward the players whilst not relying on the characters to make die rolls. However, as there are two magic users in the party, it stands to reason that the characters, realistically speaking would have tumbled the puzzle in moments. JG got it, but it took a while and a good deal of effort.

The temptation is strong to ‘help’ the players if the DM suddenly realises that the puzzle is just too tricky for them, or if he’s overdone the complexity thereof. Tempting though this course of action is, it has the potential to ruin a dungeon.

But players might very well complain if they realise, as has been outlined above, that their characters could well have solved the puzzle that the players could not. And not everyone is good at logical puzzles, although they might be very intelligent in other areas.

I would certainly be interested to hear how other DMs have solved this particular problem and if anyone’s got examples of puzzles that can be placed into dungeons to give players a tough but ultimately feasible chance of solving them.
Posted by Daddy Grognard at 13:54