Talk to the axe - 'cause the dwarf ain't listening! 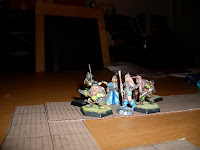 From previous sessions, it will be recalled that the party was approaching room 7, haunt of the water weird. They all filed in and spotted the treasure under the water, but sensibly didn't disturb the pool itself, being more interested in the door on the far side of the room.

(DG memo to self - if you don't want the party to disturb something in a room, put a closed door on the far side, it seems to draw them like moths to a flame)

They opened the door, no traps there, and found within a statue of a nymph, her feet encased in the stone of the plinth. As they approached the statue, a magic mouth appeared and recited the following rhyme.

You see my whole enchained in stone
I flowed but flow no longer
Though my will to be free is strong
That which chains me is much stronger
Water bound by earth
The battle won or seems it so
But those with strength enough and arms
Can start again my flow
And ‘neath my feet, unseen
There lies, yours free to take
A precious gift that may lend
Aid in your struggle with the watery snake.

JG put two and two together about the watery snake, concluding that the bones in the pool were indeed its previous victims. They set to smashing the pedestal and as the statue’s feet were freed, it turned into a woman made of water, who then cascaded to the floor and flowed into the ground. In the rubble, the party found a flask which, although they didn’t know it, contained a potion of purify water. JG at once realised that it could be used to fight the water weird. 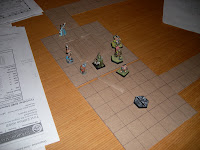 Back they went into the fountain room, and while the water weird was forming up (two melee rounds, apparently, according to MM), JG let it have it with the potion - result, one dead water weird. JG quickly scooped the coins out and found the second token as well; I got him to add up the total of the gold pieces he's now got, using his maths skills to get the answers right - another educational plus for D&D! (he can also keep track of his HPs as well - good number skills)

From there, they managed to find their way down towards room 5, where there lay in wait a bubbling pit of green slime. There were two narrow walkways to a platform, ten feet by ten feet.

I should add at this point that JG had got Alia the MU to memorise unseen servant.

They arrived at the 'northern' door, the walkway from which required only one Dex check to reach the platform, rather than the ‘western door’ which would have required four.

Ten feet across the slime was a wall carving, in the middle of which appeared to be something resemblign a tiny keyhole. They managed to work out, with a little help from Daddy Grognard, that they could use the ten foot pole to get one of Lannius' tools across to the panel with the keyhole, but although Lannius made his pick locks roll, they had no plan in place to catch the gems and they all plopped into the green slime. At least no characters went with them, although Lannius was sent on the Walk of Slime back to the 'western' door, and this time managed to make his DEX roll four times. Some time later, JG was reminded that the MU had unseen servant and had he remembered this, I would probably have ruled that said servant could have caught the gems. He wasn't too happy when he realised this.

Having had the completed sections on the map filled in for him, JG set off again, this time up the winding bit towards the skull and hands room (3 & 4). As they rounded the bend, they came face to face with three wandering orcs, who waded in with cries of "Death to the humans" (well, something like that, given that the two lead characters were a dwarf and an elf - not too bright, those orcs). The resultant melee was quite bloody, with Alurax going down and Hruthnor being reduced to 1hp. Elise the C/Mu got a cracking hit in with the lucerne hammer, more or less smashing one orc's skull to bits all over the wall of the passageway. But the orcs were eventually sliced and diced, and on went Team Adventure.

They got to the junction and spotted two shadowy figures up by the crossroads. It was two goblins with bows, keeping an eye on things for their mates in room 2. I had planned for them to send a couple of arrows in the party's direction and 'persuade' them to move on to rooms 13 and 14, and the descent to the next level. However, things backfired and JG ordered a charge, with Elise and Lannius in the vanguard. A couple of arrows whistled past them and battle was joined.

To cut a long story short, more and more goblins joined the fray from room 2 (you will remember that there were originally 21 and 4 had been slept and killed by Team Adventure in session 1, leaving 17). One by one the party members were brought down to minus HPs, and were dragged back to be brought round by Alia the MU. First Elise went down, followed by Akurath. Hruthnor was being kept on the bench by the manager, having only 1hp to begin with. 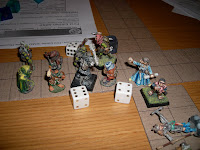 In leapt the hobbit, holding the breach, while Lannius (with AC2) was dodging the goblin blades like Jackie Chan. Then the hobbit took 8hp of damage and was at -6. Despite only three goblins left, JG was looking at the likelihood of a TPK. It was time for the arrival of a saviour with a bendy sword and a fresh set of HPs.

"Need any help, human?" he asked, and when the answer was in the affirmative, he weighed in and the party (well, what was left of it) finished off the remaining goblins.

It was a very long and epic combat, a real old-fashioned meat-grinder with a lot of rounds where no-one actually hit (this often happens at 1st level). I did give JG a couple of chances to leg it, but he stuck with it and managed to wipe out all the goblins in the TD. Result!

The newcomer was a half-orc Cl/Th named Garazor, supplied by my good buddy Old 4 Eyes, who had been following the adventure by e-mail and wanted to vicariously participtate.

Following Garazor’s advice, they are now hunkering down in room 2 for the night. They'll need at least 8 hours, for the respective clerics to get their cure lights back, get the hp levels back up and restock on spells for the next session. Which will contain a tough monster indeed, although the sheer dogged determination that JG displays makes me think that he is a dwarf at heart.

The nymph’s riddle went well. I was concerned that JG might not work it out, but he seemed to get it with a modicum of effort. Wandering monsters caused some problems and the DM's plans went slightly awry, although it ended the session with a melee to remember. I was very pleased that we didn't get a TPK at the crossroads, although there were some very lucky rolls that avoided that and the timely arrival of a certain half-orc.
Posted by Daddy Grognard at 17:50