Ah yes, aerial combat. How we love to think about it, but how many of us actually do it?


Anyway, here are our contenders: 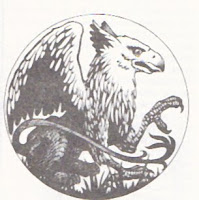 What I’ll do is pit the first two against each other and the survivor can go up against the wyvern. Not too sure what to do about the manoeuvrability factors – perhaps the best class gives the monster first attack. Yeah – that should do.

The griffon, a nippier flier comes in for another pass

End of round 2, the griffon is taking a pasting, limping badly on 10, the sphinx is mildly perturbed by the fact it’s down to 34.

Round 3 – despite its wounds, the griffon swoops in again. Roll the attack dice:

Sphinx fights back. It rolls 11,11 and finally a 15 to hit with that beak. Damage of 3,5 and 9 – the griffon goes sailing towards the ground with blood and feathers in its wake.

Pretty emphatic, that one.

Okay, so it’s time for the sphinx to go up against the wyvern. I’ll make it fairer and allow the sphinx to return to base before the call to scramble comes through.

The sphinx takes to the air. Soon, the black silhouette of the wyvern is spotted against the sky. Battle is joined. As unwieldy a kite as the sphinx is, it’s still more manoeuvrable than the wyvern, and it hurtles in to attack. Angels One Five and all that.

The wyvern swings round to strike. He rolls 14 and 2. He bites home for 10 damage but his deadly stinger misses.

End of round 2 and the sphinx has 15 hp left, the wyvern is still there on 16. Even Stevens.

Round 3 – the sphinx is not going to let this one go. He goes in for the attack again.

He rolls an 18 and a 12 – hits with both weapons. 10 damage from the bite and 5 damage from the stinger. The sphinx makes his save vs. poison but unfortunately he’s run out of hit points. The ground beckons; (perhaps we can be indulgent on this gallant fighter, as it is Christmas and say that he manages to glide to a bumpy but soft landing and get picked up by androsphinx ground crew). But the wyvern is left on one hit point and may make a prime target for scavengers, out for a quick kill.

So, in summary, the griffon, although the most manoeuvrable of the three, just didn’t have the hit points or the THAC0 to land the blows required on the sphinx when it could have counted. The sphinx v wyvern contest was much more evenly matched with that stinger hitting a couple of times and only the sphinx’s high HD giving it the good saving throw that it needed. However, that ferocious bite that the wyvern used so effectively finally told the day – but by only 1 hp.

Until next Saturday Night - happy flying!
Posted by Daddy Grognard at 18:50