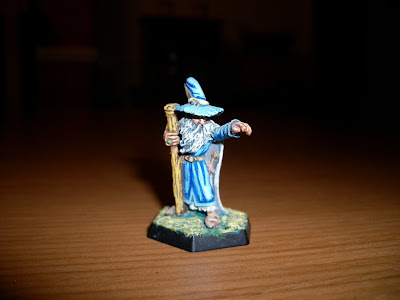 Tolkien afficionados will remember that besides Gandalf, Saruman and Radagast, there were two more wizards, Alatar and Pallando, known as the Ithryn Luin or Blue Wizards. I don't think that Andy was such a Tolkien devotee that he knew about them, but the colour scheme that he chose for this figure, which may well have been designed with a nod to Gandalf (note the sword at his belt) fits the notion of the Blue Wizards to a tee.

It's difficult to see the features clearly, what with the beard and the wide-brimmed hat, but the impression you get from looking at the figure is "You don't mess with me."

Massively powerful wizards are a staple of fantasy fiction from Gandalf the Grey to Bayaz, First of the Magi (although there is a world of difference morally between those two). There's something about the concept of an old man keeping his power cloaked until the time comes for him to unveil himself and really kick ass. The power is all the more awesome for having been kept veiled for so long.
Posted by Daddy Grognard at 11:44