Junior Grognard loves drawing. Oftentimes, it's Star Wars this and Dinosaur that, but since he's been playing D&D, the fantasy elements have crept in and the other day, he drew what he's named The Orange Dragon. He asked me if I would post it and I said Okay. I mean, what's the point of your dad having a blog if you can't get your stuff on it?

So, without further ado, here is THE ORANGE DRAGON! 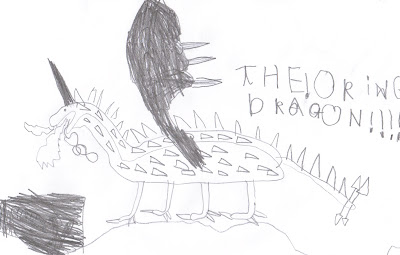 In a week or so, I'll be starting playing in a LL AEC campaign. Hope it goes okay. It'll be the first playing I've done for a long time. When I used to play, I enjoyed doing the character sketches, and so for this one, I wondered if I could still put pencil to paper and come up with something that was not wholly embarrassing.

And this is what I came up with... 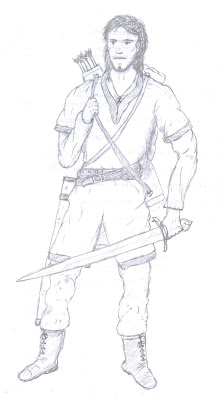 This is Jazin Greyhide, a Traladaran Darine ranger. Knowing my luck, we'll walk into a TPK and that'll be that. But I did enjoy the process of sketching him up and I'll do the same for other characters that I might play.


Any of you reading this who dig cool artwork should check out these two sites. The first is Drawings & Dragons, where the resident blogger is turning out some really good stuff. I made a couple of suggestions and the undead picture is the result. Rates are very reasonable and the style is versatile and evocative.

The second is a guy called Jon Hodgson, based in Scotland. I like his style and you should check it out, see if you do too.

I'll try to link to other neat illustrators on subsequent Thursdays. Anyone who knows of good stuff that I should check out, let me know!
Posted by Daddy Grognard at 14:19