This week, something a little out of the ordinary - yes, it's Otyughs. Well, I think that's the plural. I don't even know how to pronounce the singular. They look suitably monstrous but I can't recall having met one in all my dungeoning days. You might think that because they look utterly barmy (in fact, the MM picture of the otyugh is so naff I don't even want to use it, unlike the Neo-Otyugh, which is quite cool) they aren't worth using. Well, sit back and enjoy the fight and then tell me you don't think they're worth a go. 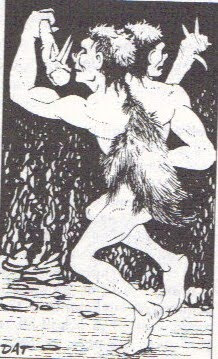 I’m not sure that the standard otyugh will be a worthy opponent for Eddie Two-heads, so I’ve lined up his bigger brother, Neo to provide the after-dinner entertainment. 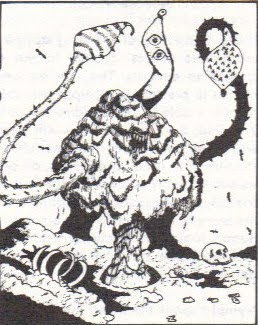 Let the dice start rolling and the blood/sap start flowing!

Eddie and Otie roll for initiative

Eddie gets a 1, Otie a 6. That’s quite a bit of difference there. I wonder what Eddie was doing while Otie was gearing up to attack. Perhaps he was dancing a little jig. If you look at his picture, that’s what he seems to be doing.

Eddie decides to show Otie he means business. And with rolls of 12 and 11, that’s a business worth investing in. Let’s check out that damage – 6 and 9 respectively. Okay, not great but they’re not mere scratches…

Round 2, and let’s see who’s quicker off the mark this time…

Eddie rolls a 2, Otie a 6. That’s one fast Otyugh – I wonder if they practice martial arts in their spare time?

Eddie rolls his to hits, let’s see what he gets. Oh dear, looks like his heads weren’t pointing in the right direction, he gets a 4 and a 3.

End of round 2, and Otie is still on 21, while Eddie has dropped slightly to 35.

Round 3 and this time, Otie rolls 3 while Eddie decides the time has come to sting like a bee with 6.

That’s a bee without a sting however, since he’s just rolled 5 and 3. Oh dear…

Otie sees his chance and lashes out with his…whatever they’re called. Flappy spiky tentacle thingies. He rolls 10, 14 and 16. Will he be as lucky with his damage rolls?

Eddie is looking battered with 16 and Otie still has 21. I do hope that no-one is betting on this.

Otie gets a 2, Eddie is that little bit quicker with 4. Let’s see if he can turn this fight around.

One attack misses with 6, one hits with 15. The damage dice speak and they say
12!

Otie lashes out but his attacks are not quite as successful – 4,4 and 19. The one that does hit (is that his mouth?) scores 5 points of damage.

End of round 4 and our contenders are on the following

A good hit or two could really finish this one off – now might be the time to order your chicken in a basket.

Eddie gets 15 and 13 for his hits, scoring 11 and 11 – ker-splat, and Otie is green wallpaper paste. But the tentacled one may have the last laugh – let’s see what his die rolls are…

6,12 and 6 – he scored a whopping 8 on that last tentacled swipe but it wasn’t quite enough to bring Eddie down. The dicephalic one hangs on in there with 3hp. 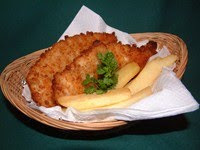 Your Chicken in a basket, sir.

Oh-kay! Fight Two and let’s see if Eddie can hold his own against Neo, the rather tougher older brother of Otie.

Round 1 and it’s initiative time

Eddie swings in with those two little tree-trunks he picked earlier. Maybe he should have picked a couple of others because these are a little off.

Round 2 and who’s fastest this time?

He’s clearly gone for his reserve tree trunks because he’s just rolled 16 and 18. Let’s see what these beauties can do…

3 and 10 - not quite as hot as all that. Neo’s tough hide is probably soaking a fair bit of the damage up. Can he do any better?

We know these fights can swing either way depending on the fickle whim of the dice, so let’s move on to Round 3

Eddie isn’t quite so fast this time as his 3 is beaten by Neo’s five.

It’s shaping up to be quite a hefty one tonight. Let’s look at the hit points –

Neo is proving to be somewhat tougher in a fight than his little brother. I wonder what will happen in round 4

16 and 3 – not sure what’s wrong with Eddie’s right arm but the left is speaking the language of Hit with another 7 damage.

Neo lashes out with his long and danglies (and that wee mouth of his) and scores 4, 12 and 7 – one tentacle and a bite do 7 and 3 respectively.

End of round 4 and is anyone about to give up and go home? Probably not.

Hit points are now at

A good roll by anyone this round could spell the end of the fight so without further ado, Round 5!

Eddie and Neo both roll a 3, so it’s Even Stevens.

Eddie rolls 7 and 5 for his to hits. That’s a bad pair of rolls for him.

And with 12, 13 and 9, Neo is about to show him just how bad his luck has turned. Damage of 6,6 and 2 – not the highest scores you can get with d6s but enough to send Eddie to the floor with lots of spiky things sticking in him.

Well, the dice have spoken and we’ve seen that two extra hit dice and a slightly better armour class make quite a bit of difference. Against lower level opponents, the ettin is a formidable opponent (in one of my games recently, 9 first levellers and a 3rd leveller attacked one and it inflicted 40% casualties against them before they finally brought it down). The otyugh and his bigger brother are hefty fighters, the first giving the ettin a real run for his money and the second flooring the two-headed one completely. Against dungeon parties, they should make a meaty threat; although their stats say that they are encountered singly (or possibly in pairs) they could give even the toughest fighter some brown-trousered moments if deployed in larger numbers.

Next time, I’ll be seeing who’s the hairest and hardest – Giant Boar or Dire Wolf? Join us for an Ice-age smack-down.
Posted by Daddy Grognard at 21:16