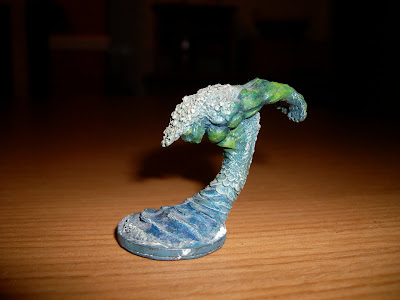 Citadel Miniatures released all four of the Elemental figures back in the 1980s. The Fire Elemental is not, in my opinion, the world's greatest iteration of that particular creature, so I decided not to put it into this particular series. The Earth Elemental will be featured in the coming weeks and I don't think that we ever bought the Air Elemental. However, this beauty really has to be appreciated for both the quality of the sculpting and the painting thereof.

We need to remember that this figure was produced way back when; modern sculpting technology was still a good few years in the future but with what they had, the Citadel designers could turn out some real gems. This is one such.

What I like about Andy's painting on this one is the way in which he's not gone for a uniform colour scheme for the whole figure. The base is that blue-grey of a storm-wracked sea, with slight highlighting on the crests of the little waves. As we move up the trunk of the figure, the piscine scales start to suggest something more than just water; there is the hint of white foam that comes to a culmination at the huge crest of spume that tops the figure's head. The main body of the figure with its firm musculature is painted in bold sea green and turquoise - it's the perfect choice of colours to suggest something that has risen from the ocean deeps.

I don't use elementals much in my adventures. Perhaps I need to revisit the Monster Manual and start thinking of good uses for these under-utilised entities. If anyone has any good pointers, do please let me know.
Posted by Daddy Grognard at 10:42