You will remember that the team was stuck down a deep cave in Burnt Man’s Haunt, having just despatched two flame zombies. JG decided that as they had no idea how many more were down there, and they had already taken damage, they should make a strategic retreat. As they headed back towards the rope, they heard running footsteps in the dark and some very weird sounds, a cross between gibbering and whimpering. They held their fire as out of the dark came a dirty, shabbily dressed man, badly burnt down one side of his face and upper body. He started to babble about flames, fire loving us, wanting us to join the kingdom of ash, and so on, and advised them in no uncertain terms to run as fast as they could. They started to climb and Alurax, Akurath and Elise (again controlled by JG as Mummy Grognard was not playing this session) had already made it to the top when three flame zombies appeared out of the darkness. They joined hands and projected a fireball up after the fleeing adventurers. The rope caught fire, as did Zhastar’s cloak. The doughty hobbit lost his grip with one hand but held on with the other (bad Dexterity check, followed by very good one).

They arrived outside the dungeon to find that their donkey was still alive, not having been eaten by any passing thing with an appetite. They set off back down the trail, with the sound of percentile dice checks for wandering monsters rattling in their ears. They didn’t get a positive result until they were nearing the Clawbriars, when one happened that may well change the entire direction of the campaign. I’d rolled “Party of Adventurers 3-4 level” and having acted out a rather terse stand-off, they decided to pitch a joint camp as the prospect of crossing the Clawbriars in the dark was not a good one.

As they set up camp, I had the NPC party leader, a cleric called Pharas ask Team Adventure about their activities. This was a device by me to get JG to try and recapitulate the party’s doings so far and ensure that he could remember what had been going on. He did remarkably well actually.

During the talk at the fire, the cleric said that his party was coming back from Firebreath Forest, where they had been looking for the lair of a dragon reputed to be sitting on a hoard of gold. They had not found the lair, having run into some too-tough monsters and were returning to town to get more supplies and reinforcements. JG immediately thought to himself that his foursome would be ideal reinforcements for the adventure.

I rolled another encounter during the hours of darkness, this one being “Wraith”. Yerenna and Galitia came back with armfuls of firewood and reported that they had heard strange noises and an eerie feeling from a ruined building nearby in the trees. Pharas decided that he and the two clerics in JG’s party should go and investigate. 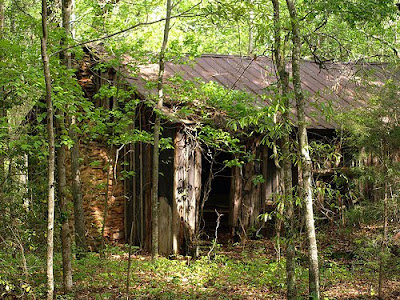 They arrived, decided to circle the building and break the door down. It was remarkably resilient, withstanding three attempts at Open Doors. In the end they decided to go in through the window. Alurax and Akurath went in first, and were confronted by a figure darker than the darkness which came towards them, making eerie moaning sounds. They thought “Zombies!” and dived back out through the window to report what they had seen. Pharas considered that zombies were an easy job, and - with Yerenna and Galitia - finally managed to get the door open and burst in, holy symbol held high. Pharas managed to make his turn roll with a 16 and forced the wraith back into a corner, where the two fighters laid into it with +1 swords. Unfortunately, the wraith made some good to hits and ended up draining a level off each of the fighters. Realising that it would not be long before the wraith could come at them again, and unsure of his ability to turn it a second time, the cleric called retreat and the entire party headed back to the camp fire. I ruled that the wraith was tied to the building and so did not pursue.

The next day, they arrived at the river crossing, and signalled the boat to come across (JG remembered to use the mirror to flash the signal). The boat arrived, crewed by Pellis the boatman and his assistant Ozas, and did two journeys to get all nine of them, plus the donkey, back to Antiar’s Landing.

The first thing they did was book another week’s stay at the Soaring Falcon, then have a discussion about whether they should sign up for the trip back to the dragon’s lair and whether they could trust the cleric and his friends. The fact that the lair was in a place called Firebreath Forest hinted at it being a fire-breathing dragon and there’s only one colour that can do that sort of trick.

At this point, Pharas and Hergest turned up and wanted to talk turkey about their trip. They proposed to leave the next day, and would spend most of that day buying supplies and another pack animal. JG was still committed to going with them and we left it that they would meet up down by the river crossing the next morning.

So we reach the dawn of Day 10 since the party arrived in Antiar’s Landing. They’ve already killed an ettin, taken on a pack of marauding goblins, been across the river, met flame zombies, a wraith and are about to set off for the lair of a Red Dragon. And no-one near 2nd level yet.

In case anyone is wondering, the XP so far are as follows:

I’m not sure what’s going to happen on the next session. Firebreath Forest is at least twenty miles south of the river, and that’s a lot of wandering monster rolls. And Pharas, from being just the result of a die roll or two is now shaping up to be rather over-confident and extremely ambitious. Yes, there are nine of them now but that’s only 18 levels between them, which is not much if they come up against something nasty. And why do I get the feeling that Pharas is not telling them the whole truth?

I got an incredible feeling of excitement when I realised that the campaign had taken an unexpected turn. Whilst I now need to get something in place for the party, that work is part of the fun of running a sandbox. In the newer, story-driven campaigns, the encounter with the NPC party would have been scripted, planned and fully statted up before it even happened. The place of the encounter in the great story arc would have been established as well and, had the party been on another railroad, no amount of enticement from the NPC party would have been allowed to divert them from it.

Yes, Team Adventure may end up as ash; yes, they may run across something in the wilderness that finishes them off. But that’ll be their decision, not some fiat from the DM. And they may encounter something that sends them off in yet another unexpected direction. They don’t know until it happens – nor do I, and that, for my money is what the fun of being a DM is all about.
Posted by Daddy Grognard at 11:56