Previously, the party had enjoyed some success and monetary gain on its jaunt to the Spider Farm. On this session, JG had asked Mummy Grognard to participate, to which she had agreed, with certain preconditions. Viz. no trying to take over, no issuing orders and doing things for her character, etc.

So we began and what seemed like a simple task - go and get some armour - suffered an attack of ditheritis, ended up taking about an hour or so to decide what to do, despite me trying to orchestrate a meeting with the party that had come back across the river with casualties (JG didn’t pick up on this and I had no way of making him without it becoming a bit railroad).

Eventually, they decided to go across the river and have a wander around. I had no stats for the Clawbriars ready, so I thought to myself, they'll probably run into a wandering monster, have a tough time but be ultimately victorious, return home with XP, job done.

Not so - in fact, they bought themselves a donkey for the travelling equipment, got across the river, set off south along the fairly well-travelled track that led away from the river. Pretty soon, it split into three, one going towards the Grey Ravines, one heading south into Redstone Ruins and one going towards Burnt Man's Haunt. They took the final one and headed up into more hilly terrain, making camp for the night near some craggy highlands.

MG's character Elise decided to go off for a jog and whilst doing so, came across a large patch of burnt undergrowth with no sign of a camp fire as such. She went back and told the party, also that she had seen what appeared to be a cave entrance further up the high ground. As it was getting late, they decided to camp down for the night.
In all that time, since crossing the river, I'd rolled for wandering monsters and had got a consistent string of 'nothing'. It was like the last few sessions of TD all over again. In fact, JG even sussed what I was doing, when nothing much seemed to be happening and then he heard the sound of the dice behind the DM's screen and said "Uh-oh, wandering monsters!"

The next morning, the party approached the dungeon entrance. They had initially decided to leave the hobbit to look after the donkey and camp; I however observed that if they had managed to load all their stuff onto said donkey, why not tether him outside the dungeon and then go in?

Good idea, they thought. And in they went. Within about sixty feet or so, they found a charred body, burnt to a crisp, in the epicentre of a large area of sooty deposits on floor, walls and ceiling. Having checked to see if there was anything about it that could tell them about what had happened, they pressed on and reached a crossroads. They chose the right-hand turn and this led them on to a choice of three tunnels, all of which were lit with a strange dull orange glow. At that junction were two more bodies, both charcoal but from the way they were lying, they were facing the tunnels with the glow, rather than moving away. What could have caused these strange deaths?

The first tunnel they tried brought them out into a room in which was a strange shaft that led downwards, with no sign of a bottom. Out came the fifty foot of rope and iron spikes and soon Alurax was going down to see what could be seen. He emerged at the bottom of a twisting passage where it seemed that some sort of pile of boulders and rubble had fallen into the tunnel, leaving a gap above it through which access could be gained to the beyond. There were also, he could hear, strange noises, like a dull groaning and footsteps approaching.

He hurried back up the rope and informed the party of what he'd found out. They decided to go down en masse and confront whatever it was. At the bottom, they saw two shambling figures coming towards them; the creatures seemed to be animated burnt figures, with smoke issuing from their mouths and noses. They closed in on the party and combat was joined. 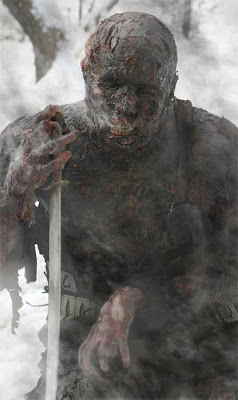 It was a brief but vicious battle, with Zhastar the hobbit going down to -6 and Alurax to -3 before the party, with a judicious use of the d30 managed to put paid to the monsters.
Unfortunately, at this point JG was getting very upset and frightened at the way the adventure was going and MG was getting concerned that it was all too much for his tender years. Although they had won the combat, they were in a dark cavern in the depths of the earth with unknown creatures coming at them. I thought that we had best wind it up there, and started to pack away; fortuitously as it turned out because MG's parents appeared about five minutes after the decision to finish.

What were the strange creatures they encountered? The answer can be found in an excerpt from my sketchy notes regarding this hex:

Burnt Man's Haunt - I thought that this could be a situation where a group of hunters/poachers/etc stumbled across a rift to the Elemental Plane of Fire and some were possessed by fire spirits, becoming Flame Zombies - a bit like the Harginn in MM2. They can only be doused, as it were, by holy water blessed by a sufficiently high level cleric. A party managed to seal them into the cave where the rift is by use of Move Earth or some such, but now a landslide has set them free and now we have burnt bodies littering the landscape. Maybe a fire-deity cleric seeks the rift to set free some serious fire elementals to run rampage.

I had not anticipated that the party would get this far and the vast majority of it was done on the fly, with the Harginn used more or less as statted in the MM2. This accounted for the fact that apart from the flame zombies, the rest of the tunnels were suspiciously empty.

I could probably write up something more organised in the week forthcoming but I reckon that MG and I need to have a good think about the way that the campaign is going and if it's too much for JG with the emotional intensity that he has to experience on the sessions. So I'll hang fire on any more work on Burnt Man's Haunt until I get some indication that it'd be worthwhile.

Looking back on the way that the session went, I probably could have done to have had a recap so that JG would have remembered some of the hooks that he had discovered on the previous sessions. The vague and directionless first hour was a result of me not taking care of this.

The adventure picked up when we got to the caves; I had been probably over-reliant on the wandering monsters to give the party a tough fight and provide some experience points for them on their steady climb towards second.

Forced to DM on the fly, I started to plumb the darker side of my ideas bank; the atmosphere that I created was perhaps a little intense for JG and it was for this reason (rather than anything to do with the system, which some have suggested) that we decided to end it where we did.

I was also forgetting, having done so much of the Training Dungeon with JG that MG had not had any real experience of the game system. I have put measures into place that should overcome that and we’ll see how they work out in the next session.

(Postscript - I'd not see that picture before I went searching Images for 'burnt bodies'. It's surprising just how close it is to what I saw in my mind's eye when thinking of the Flame Zombies)
Posted by Daddy Grognard at 12:52