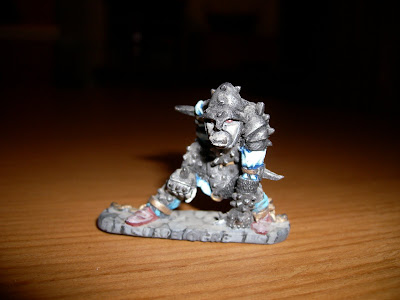 He's big, he's bad, he's a bruiser. Although he's called a slave ogre, presumably because of the chains around his ankles (not sure if you can call them manacles if they're not on the hands), he'd make an excellent villain for a low level dungeon.

His armour really has the look of metal (yes, I know that it IS actually metal but you know what I mean) and there is the neat use of slight shading around the arm straps to give the look of stonewashed denim to his sleeve.

Again, Andy's gone for the stone floor effect on the base, and for added exotic flavour, he's made the ogre an albino (note the red eyes balefully staring). IMHO, it gives the figure even more of an air of menace.

Ogres generally don't tend to wear armour. They're regarded as a bit too dim. But if they did, I'd like to think they'd look like this.
Posted by Daddy Grognard at 10:57